When British Airways embarked upon a £3.2 million HVAC upgrade of its main Technical Engineering Facility (Block A) at Heathrow Airport, UK, it called upon the expertise of York, an independent manufacturer of air conditioning and refrigeration equipment.

In line with the latest European regulations governing the use of CFC refrigerants, British Airways identified the need to replace the existing chillers that serviced its engineering facility. York's YNAP air-cooled liquid chillers, which use non-ozone depleting ammonia (R717) as the refrigerant, were chosen for the job (Plate 6). 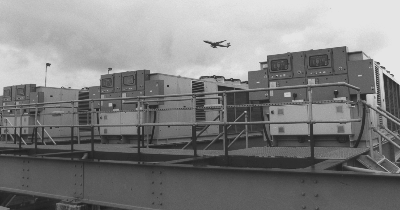 One of the largest telescopic cranes in the country was required to assist in the installation of three chillers, each weighing 14 tonnes. The chillers were hoisted over the engineering hangars that service British Airways' large aircraft to a position on the roof of the facility. The operation was restricted to a four-hour time slot and it was essential that airport activities were not disrupted.

The York YNAP is a monobloc, self-contained chiller for water and brine cooling. It has a cooling capacity of up to 740kW and the three units provide air conditioning for both the hangar facility and offices, which are suspended from the roof structure.

In line with British Airways' health and safety requirements, the unit is fitted with ambient and water ammonia sensors which are connected to fast-acting, low leakage isolating valves installed in the chilled water system. Independent refrigeration circuits are provided with each open drive reciprocating compressor, along with a filtration system, thermal expansion valve and a liquid line shut off valve with pressure limit switches.

A robust design and corrosion resistant condenser coil fins provide protection when operating in a variety of environmental conditions and prevent deterioration of the unit through exposure to aviation fuel. In addition, a thermostatic heater provides protection to –18°C ambient temperature. Condenser coil fans are also vertically arranged to direct sound away from the surrounding structure to minimise sound levels.

The YNAP utilises a galvanised steel micro-processor control panel with compressor and fan contactors, and features an ISN chiller sequence controller which maintains the leaving chilled water temperature to the fan coil system. The controller also acts as a gateway for the BMS system.