According to DDC its new BU-65565 PMC card provides a complete COTS (commercial off-the-shelf) hardware and software solution for interfacing a PCI bus-based embedded system with one or more Mil-Std-1553 buses. Mil-Std-1553 has been adopted as the standard internal databus for many of the world's military aircraft and the BU-65565 (Plate 4) is thought to be ideal for systems development and test purposes. 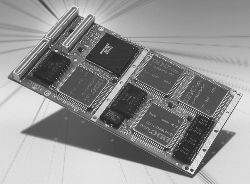 The BU-65565 uses DDC's enhanced Mini-ACE terminals to offer between one and four dual-redundant 1553 channels on a convection-cooled or conduction-cooled card. The board's PC interface is said to be a fully compliant target agent, providing a 32-bit interface that operates at clock speeds of up to 33MHz in either 3.3 volt or 5 volt signaling environments.

The BU-65565 supports PC interrupts and contains a 32 x 32 FIFO to accelerate burst write transfers from the PC host. The BU-65565 will reportedly prove invaluable to systems designers wishing to simulate Mil-Std- 1553 systems or for use as the core of test or data recording equipment.

Each 1553 channel may be independently programmed for BC (bus controller) RT (remote terminal) selective message monitor or RT/monitor modes, providing support of Mil-Std-1553A/B, STANAG-3838, McAir and NUL-STD-1760. In addition to providing software compatibility with DDC's older generation ACE and Mini-ACE (Plus) terminals, the board's enhanced Mini-ACEs are said to incorporate many advanced architectural features such as multi-frame message scheduling, message retry and bus switching schemes, as well as asynchronous message insertion.

The BU-65565 is supported by free software, including a C++ library and VxWorks driver. The library and driver comprise a suite of C function calls that serve to offload many low-level tasks from the application programmer.

The standard BU-65565 board minimizes power consumption by using 3.3 volt power for its PCI interface and 1553 logic. A non-standard version of the card requiring only –5 volt power is also available. To provide thermal conduction, the conduction-cooled version of the BU-65565 includes thermal vias and a black anodized aluminum plate.

DDC has also introduced a new series of space-rated motor drives which are reported to be 100k-rad tolerant and Single Event Upset (SEU) immune to 36mev. The Space-520R, which is part of DDC's new PWR-82520R Space Motor Drive series, is intended to drive 3-phase brushless dc motors and is available in 1 amp, 3 amp, and 10 amp current versions, all rated at 100 volts. In DDC's opinion it will find use in many commercial and military space applications such as antenna and solar array positioning, radar positioning, thrust vector control, pump motors and fan and compressor motors. 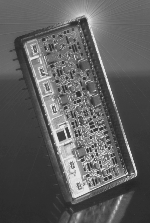 The drive uses a control technique called 4-quadrant complementary control, which is reported to provide excellent current linearity of 3 per cent and current regulating accuracy of 5 per cent while maintaining holding torque over the input range even at zero (null) commanded input. This is said to eliminate the "zero input dead band" that is common with most switching techniques while maintaining complete loop control.

All models within the family have the same operating characteristics but are optimized for rated current. The command amplifier has programmable gain and compensation to enable the user to match the loop performance to the system and motor. The internal PWM is adjustable and can switch from 10-100KHz for operation with low inductance motors.

The 3-phase drive is commutated from Hall sensors located in the motor from which the tachometer signal is also derived. The gate drive is optimized for radiation performance and noise immunity while providing a controlled signal to the rad-hard MOSFET output stage. The Space-520R is optimized for minimal quiescent power through the use of programmable power supplies. The PWR-825201 & R3 comes in a 41-pin plug-in or surface mount package and the PWR-82520RI0 comes in a 43-pin surface mount package.