A fundamental change is reported to be taking place in the way BAe Systems recalibrates the jigs and fixtures (tools) used in Airbus wing production at the company's Broughton site in North Wales. The old process currently being phased out involves checking the tools by placing them on an appropriate tooling master reference (Plate 2), essentially an elaborate hard gauge. The new process hinges on creating virtual models of the masters by reverse engineering them on an LK co-ordinate measuring machine (CMM). 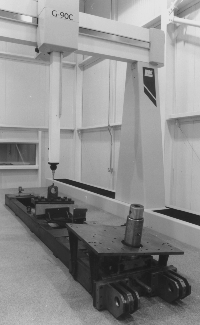 Digital models are thus created against which the accuracy of production tools can be periodically verified, or in BAe Systems parlance "recertified", during subsequent inspection on the same CMM.

According to LK, inspecting each of the 693 recertifiable tools at Broughton in this way will be five times faster than the current system of putting a jig or fixture onto a physical master, so substantial savings will result every time a virtual master is used. It is planned over the next three years to reverse engineer all 130 masters.

Further savings will result as there will no longer be a need for occasional recertification of the master references against a model of the actual wing, or "static site", housed at BAE Sytems Airbus UK's other site in Filton, near Bristol.

Says Trevor Wiggins from the Tool Engineering Department at Broughton:

The beauty of reverse engineering using LK's CAMIO software supplied with the CMM is that it is quick enough to be able to create a virtual master in an average of three to four hours. We can complete this one-off exercise and check a jig or fixture on the CMM within the time it previously took us just to recertify the tool.

As first-off checking using the new process takes no longer than tool recertification did before, the entire three year digitisation process will be "for free" in terms of metrology departmental time.

Another advantage claimed of co-ordinate inspection over using physical masters is that instead of giving go/no-go results, the CMM produces absolute measurements. This enables statistical process control (SPC) techniques to be employed to compare successive measurements on a tool, plot trends and take management decisions such as whether to redesign parts of the tool, or perhaps extend the recertification period, which currently is anything from six months to three years.

The relevant LK SPC software was supplied as part of the CAMIO package along with a geometric interface for part programming and surface analysis for 3D best-fitting of measured data to the digital model. A graphical reporting package has been included to speed the creation of management data and to assist in traceability from the wing back to the tool in accordance with JAR, CAA and other aircraft standards.

Hitherto, a subcontract metrology firm has inspected some larger Airbus tools which were time-consuming to check using physical masters. An example quoted is the recertification of the main assembly jig for profile boards on the A3301340 wing, which is said to take two days on a CMM for the port side and the same for starboard, but which would take a prohibitive ten days to inspect by the conventional route. All subcontract work will now be brought in-house following the installation of the long-bed LK G-90C with its nominal 4.5 x 1.5 x 1.5 metre measuring envelope, resulting in further financial savings.

As assembly of a wing progresses, the size of sub-assemblies becomes so large that the use of static metrology equipment is considered no longer feasible. (The latest A340-600 wing, for example, is over 30 metres long!) Another benefit claimed of digitising the smaller masters is that the mobile laser checking rig which takes over is able to use the same virtual models against which to check the corresponding elements within a larger jig or fixture.

In February 1999, when Trevor Wiggins and his team were researching the market and deciding which CMM to buy, they evaluated six or seven suppliers. Reasons given for opting for LK were the competitive price for a long-bed machine, which other companies tend to class as a special and charge more for, and commonality of software with other LK CMMs on site. They also liked the use of modern materials in the machine construction, notably ceramic for the bridge and quill.