For many years the detection and reduction of the effects of vibration in aerospace structures have occupied researchers and engineers and, as technology has advanced, more precise methods have been developed to lessen the consequences of this basic phenomenon. Vibration in aircraft can come from a number of sources, including the airframe, runway rumble, noise and interference, and these effects have to be analysed and filtered out as far as possible, in order that the correct functioning of engines or other equipment can be monitored and any abnormalities detected at an early stage.

Methods have been devised ranging from basic isolators which minimize the transmission of powerplant noise and vibration to the airframe, and airborne vibration monitoring, which was introduced during the 1960s, as well as advanced systems introduced a decade or so later. These have been further developed in the succeeding years and are partiularly important for vibration monitoring of critical components in helicopters, in which the information is analysed and loaded into the aircraft management system for the use of the ground crew.

Vibration isolation systems have been mounted on many turbojet and turboprop aircraft and a typical system used on P & W engines on corporate aircraft uses, for turbojets, three isolator assemblies, the forward one of these acting as a steady support which only reacts to vertical loads. The other two isolators are located on either side of the engine and react to primary loads. These isolators incorporate a resilient element which provides long life and uniform temperature over a wide range of thermal conditions. Another system for turboprop engines minimizes the transmission of propeller and powerplant noise and vibration to the airframe, resulting in a smoother and quieter flight. In this case, four isolator assemblies are used, one on each side of the engine, one on top, and the other which functions as a stabilizer, located at the rear top of the engine.

In the early 1980s the Helitune company introduced the first laptop computerised vibration management equipment for rotor balance optimisation of helicopter and turboprop aircraft, and succeeding developments have been designed to smooth vibration levels to those similar to jet travel. With this equipment, flight testing techniques were customised to the specific needs of each aircraft type. This, together with flight conditions and adjustments, was used to describe the behaviour of the aircraft. As the equipment is used, aircraft sensitivities and inter-relationships between types are extracted, thus creating a system which adapts to its host.

The first military organisation to make large scale use of this information was the RAF for the Chinook fleet. For these helicopters, reduced rotor imbalance reduced the maintenance man hours devoted to the repair activity per aircraft from two per flight hour to 0.5 per flight hour. Also, the need for maintenance test pilots was halved and operational air speeds were increased from 110 knots to 140 knots. The system produced savings on many other types, including US Navy C-130 Hercules and P-3 Orion, which types recorded a reduction in major component failures and an increase in mean flight hours as a direct result of dynamic propeller balancing.

Stewart Hughes has been well-known for some time with its RADS-AT system for tracking and balancing helicopter rotors. The equipment monitors vibration, diagnoses out of balance conditions, and clearly indicates the required adjustments to be made. A derivative of this system was selected by the RAF to enhance the smooth running of its C-130 fleet and the service lives of power transmission components. The service wanted to improve the standards of balance on the Allison/Hamilton Standard turboprop combination on the aircraft by using dynamic measurements obtained with engines running, rather than with the static techniques previously employed. The equipment evaluates both propeller imbalance and presents a balance solution, and acquires and displays vibration data from the engine and transmission. Accelerometers monitor vibration at selected points in the power transmission chain, such as reduction gearboxes. Signals are interfaced via a data acquisition unit to a hand-held control and display unit used to operate the system.

With particular application to helicopters, the introduction of Health and Usage Monitoring Systems (HUMS) which monitor the balances and vibration signatures during every flight, enables the operator to have knowledge of the problem, thus eliminating dedicated air tests. The core module of HUMS is believed to be the rotor track and balance (RTB) implementation and techniques. This is the main factor in reducing maintenance costs and by avoiding the wrong diagnosis of faults, reducing the number of components needing replacement.

It is known that the health of rotating machinery is dependent on its vibration. The amplitude of this vibration and its characteristics are a direct indication of the balance of a particular component. Airborne vibration monitoring (AVM) systems must include accelerometers and the appearance of the now well-known piezoelectric accelerometer provides the means to give an electric output when pressure is applied to it. This kind of vibration transducer has a capacitance that varies with the acceleration, which is felt by a mass that generates a force on the piezoelectric crystal. This acceleration is modulated by the vibration at that engine location. Current vibration monitoring systems have the ability to determine that a specific part or module of an engine has exceeded a pre-determined level of vibration or will do so in the near future.

One of the great advantages of engine vibration monitoring is that it provides, through the amplitude of vibration, a direct indication of the state of balance of the part. The better the balance, the lower the wear and the longer the life.

As indicated vibration health monitoring has a particular and vital part to play in assessing the condition of critical components of rotary wing aircraft. The system developed by GKN-Westland complements other transmission monitoring techniques, including wear debris monitoring and spectographic analysis. The superiority of VHM (vibration health monitoring) for locating defects has been referred to as it can be used to detect occurrences which do not produce debris, such as cracks and imbalance. It has the potential to detect many faults in various types of gears, including tooth pitting or bending fatigue cracks, and incorrect meshing. For shafts, rotational misalignment can be detected as well as spline drive wear and flexible coupling wear, loosening or failure. Various types of distress in bearings can be shown, as well as many other kinds of imperfections that may influence the dynamic characteristics of the transmission (Plate 1).

A typical example of VHM abilities is for defects in bearings which are assessed once the raw vibration signal has been processed to remove gear and shaft related frequencies. The residual signal is then processed in subsequent analysis to emphasise and quantify any signs of faults. 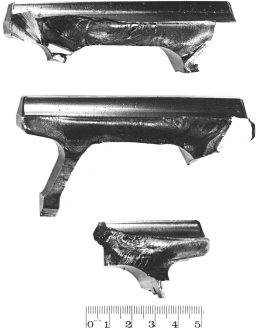 The primary assessment consists of determining bearing indices based upon parameters extracted from the vibration signals. The secondary assessment concerns the determination of quasi-periodic events in the residual wave forms to identify the specific bearing. In addition to the secondary discrimination, cross-referencing with the vibration characteristics of shafts affected by the bearing degradation is also undertaken.

Operational benefits have been demonstrated with this system on helicopters since the 1980s. Early detection of localised defects on pinions was one of the first actions and later VHM showed clearly the benefits relating to early assessment of the conditions of accessory components mounted on gearboxes (such as oil coolers) which led to improvements in component life and the reduction of through-life costs.

The importance of adapting diagnostics for specific transmissions and gearboxes has been demonstrated over the years and GKN-Westland has developed specific algorithms for this purpose. These activities include: the identification of a gearbox configuration, speeds and materials to allow this approach; the analysis of gearbox flight or rig test data to confirm integrity of algorithms and set threshold levels; the identification of failure mechanisms of the gearbox by review of failure modes and defects; and the identification of representative data sets in GKN-Westland archive to reduce the amount of "specific to gearbox" testing. In addition seeded fault testing of specific-to-gearbox faults is made to confirm diagnostic sensitivity; also, diagnostics are implemented into the monitoring system; and integrity and maturity is tested on specific gearboxes.

In the late 1980s and early 1990s development was proceeding of the GKN-Westland Active Control of Structural Response (ACSR) system on the EH101 helicopter after extensive trials had proved the concept and indicated that treatment of the response of the structure, rather than the source of the vibratory forcing, offered a more practical and cost-effective solution.

The central element of the ACSR system is the adaptive control unit (Figure 1), whose primary function is to determine and schedule the vibration controlling force demands to the ACSR actuators, based on the vibration information provided by airframe accelerometers. The control unit typically operates at up to four harmonics of the fundamental main rotor frequency, for which information is provided by an existing rotor speed sensor incorporated in the main gearbox. A pilot control panel gives top level control of ACSR operation, and an optional test interface terminal permits interactive set-up, running and optimisation of the ACSR system in flight by an operator. 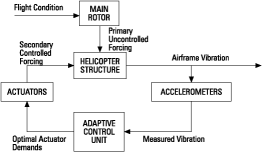 At the heart of the system, the control unit monitors vibration from a number of accelerometers, calculates and schedules the vibration reducing force demands to the ACSR actuators, and self-adapts its control algorithm to maintain performance against varying flight conditions and aircraft weight and centre of gravity. The system operates in the frequency domain on vibration at distinct harmonics of the main rotor fundamental frequency. Although the ACSR system configuration has been optimised for the control of the dominant blade passing frequency vibration, the system has been shown to have the potential to control other rotor-induced vibration harmonics.

The major factor that critically affects the successful performance of any ACSR installation is the positioning of the actuators which produce the controlled secondary excitation within the particular structure. In the EH101 helicopter the configuration which offered potentially significant vibration reduction as well as being a practical installation identified that in which an ACSR actuator is placed in parallel with each of the four main gearbox support struts.

The control unit monitors vibration from a number of accelerometers, calculates and schedules the vibration reducing force demands to the ACSR actuators, and self-adapts its control algorithms to maintain optimum performance against varying flight conditions and aircraft weight and centre of gravity. Operation of the control unit is governed in the first instance by the pilot via a master on/off switch on the pilot control panel (PCP). In addition, the PCP incoporates a mode switch with indicator lamps, for the selection of the desired set of algorithm defaults and indication of the failure status of the ACSR system.

Ten ACSR accelerometers are located at various strategic points within the aircraft, including the cockpit and cabin floor, the top structure and tail rotor gearbox. The ACSR main gearbox support actuator/strut combined unit is an assembly of three components; the compliant ring element, the force generating actuator, and the strut down tube. The actuator is mounted in parallel with the primary load bearing compliant element, and is simply required to input the controlling vibratory forces while accommodating quasi-static primary flight loads.

Proving the concept involved extensive ground and flight tests, the latter being conducted on a variety of helicopters. One of these is the EH101 and, early in its production programme, 5R vibration levels in the cabin and cockpit were reduced by at least 75 per cent with ACSR fitted, and up to as much as 90 per cent at a flight speed of 140 knots. Power required by the ACSR installation was less than 4HP. Similar 5R reductions were demonstrated in a range of manoeuvring flight regimes. A target vibration level of 0.15g had been set for the EH101 and significantly lower levels were recorded following the implementation of ACSR. This system is part of the standard equipment for the EH101.