With the relentless pressure exerted by customers on their specialist subcontractors' costs and prices, maximising machine reliability and minimising maintenance costs and downtime have never been more important. For Loughborough-based precision engineer Danatrol, a long time user of Hitachi Seiki lathes, two TS 15 two-axis machines (Plate 4), which the company installed some two years ago, have not disappointed.

Since installation, the company reports that it has not had to change coolant on the TS 15s due to the inbuilt Eco-Eco low maintenance system. In addition, lubrication of machines has been eliminated, power consumption is dramatically reduced and setting times have improved by around a quarter with cutting speeds increased by almost 75 per cent over previous methods. 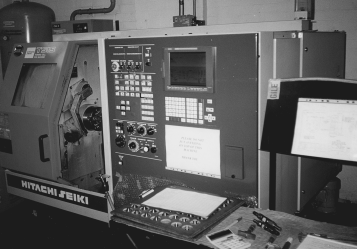 Danatrol has been established for some 25 years, and currently employs 24 people operating, despite the engineering sector's well reported difficulties, on a three-shift system. The company does a certain amount of general commercial work, but 90 per cent of its orders are for aerospace and electronics industry customers, which require precision machining of small components such as connectors and spigots in a variety of materials including stainless steel, Titanium, Inconel, Incalloy and Hastalloy. Batch sizes can range from ten to 10,000, but a typical order will be for between 250 and 1,000 parts.

With ever tighter delivery deadlines, not to mention the lack of floor space to accommodate build-up of work in progress, Danatrol's pattern of production demands complete reliability with the minimum of maintenance downtime to which the Hitachi Seiki Eco-Eco philosophy appealed.

Danatrol decided many years ago to make the move from traditional machinery to become an entirely CNC operation. While machining centres are sourced from a variety of manufacturers, turning is 100 per cent Hitachi Seiki to which works director Sailesh Chauhan explains: "We originally introduced Hitachi Seiki machines because we were impressed with reliability, service and back-up. Several of our key customers use similar Hitachi machines and so the compatibility of tooling and programmes offers us a distinct advantage. But owning Hitachi Seiki machines also aids our investment programme", he says.

Sailesh Chauhan explains: "We have a continuing investment plan and try not to keep any machine longer that seven years. That way we can ensure a quality product with good tolerances and surface finish, while ensuring that we have maximum potential to maintain high productivity by keeping up with technological developments. Hitachi Seiki machines are also sought after in the second-hand market, with high resale value which helps our funding".

A number of features of the TS 15 CNC lathes attracted Danatrol. Not only did the concept of the compact, two-axis machines fit requirements nicely but, says Sailesh Chauhan, the functioning of the Seiki's control was attractive. "We program both off-line and at the machines which have many useful features making life easy for our setter/programmers and accelerates our whole machine setting process. For example, the ability to list tool types and offsets, rather than having them scribbled on bits of scrap paper means we can download the offsets and keep them on record against future repeat batches."

He goes on to explain: "We also appreciate the 'dry run' facility on the control, with a clear graphical illustration of tool movement. On average, we estimate that using the TS 15, each program is some 20-25 per cent more effective on the component". Reducing programming time is particularly beneficial as Danatrol only employs three full-time skilled setter/programmers - the remaining production staff are operators or, as he prefers to describe them, inspectors. "With such reliable machines, everyone can be an inspector now", he says.

The rigidity of the TS 15 also comes in for praise, as does the direct spindle drive. He maintains: "Because there is no loss of torque from the drive we are finding insert life is far better. In 316 stainless, for example, where we used to run at between 100 and 120m/min, we now cut at 175 to 200m/min and, in consequence, cycle times have been considerably reduced".

When Danatrol was considering machine purchase, the Hitachi Seiki "Eco-Pack" promised a considerable improvement in maintenance and running costs. The machines have inbuilt self-lubrication, which is thought to remove the need for regular topping up with lubricating oil, and fully sealed guideways and ballscrews eliminate coolant contamination.

Sailesh Chauhan says "We haven't gone through a formal cost-saving exercise, but the benefits are self-evident. Ordinarily we monitor the number of times we top up a machine with slideway oil for total loss systems - the TS 15s simply do not appear on the list. And we find, as no tramp oil gets into the coolant tank which we expect from a total loss system, whereas we normally change coolant every six months, we have been running the TS 15s for two years and haven't had to change the coolant yet".

When it comes to adding up the savings he points to Hitachi Seiki's "wind tunnel" spindle motor cooling system. Energy savings from the spindle drive are high because the unit only draws 90 watts compared with some 400 watts for a conventional Freon-based motor cooling unit.

And with its thermally balanced 20° slant bed box casting and large diameter Hurth coupling, the TS 15 becomes a particularly rigid turning platform from which Danatrol takes accuracy and repeatability for granted. Sailesh Chauhan explains: "Although the TS 15s are well capable of working to tolerances below 0.025mm, most of our work is within 0.1mm and the machines well-exceed our surface finish requirements".

Although the TS 15s have continued to confirm Danatrol's view of the reliability of Hitachi Seiki machines, he is keen to praise the service and support from Egham; "They are really on the button", he maintains. In particular, praise is handed out by Sailesh Chauhan in the way the service department is run. "Some companies, you can hardly get past the receptionist, and if they send an engineer out, he rarely has the parts. With Hitachi Seiki, you actually speak directly to a service engineer who has current field experience, and nine times out of ten we can even resolve the problem without a call-out which means we are in production again quickly."