We are informed that a powerful heavy-duty machine for welding by the "friction stir" process, able to withstand high thrust forces from the working tool, has been designed and manufactured by Crawford-Swift Ltd.

The new "Powerstir 360" (Plate 1) is believed to be the first commercial prototype friction welder built and operating in the UK. 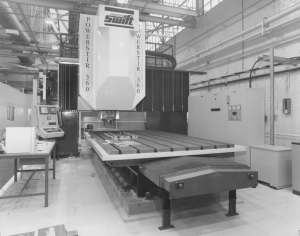 Crawford-Swift have "tailor-made" a machine in an order for British Aerospace.

It is being used at British Aerospace's Airbus Filton plant on a rigorous two-year research and development programme into using friction stir welding for fabricating aluminium wings and body skins for aircraft - especially the planned next generation of large aircraft, among them the proposed 550-seat double-decker Airbus A3 XX.

The welding technique, invented and patented in late 1991 by TWI, offers far-reaching new opportunities for joining together aluminium alloys and other metals that have traditionally been troublesome to weld conventionally without distortion of the material, cracks, voids or other blemishes, all with the inherent risk of fatigue failure. Several profiles can be joined in a high quality weld to produce very large pieces. There is thought to be virtually no limit on size: when aluminium profiles are produced by existing extrusion or shaping processes, the dimensions are limited by the machines available. The new technique is reported to be quick and "environmentally friendly", with no noise, dirt, fumes, sparks or need for goggles. Further benefits claimed are that the welding tool is not a consumable item and no special, expensive gases are required at the welding tool to provide an inert atmosphere around the welding process.

Crawford-Swift is a dedicated engineering company with skills going back more than 150 years. This same specialist expertise has now produced the pioneering Powerstir 360. The company believes that, given that this prototype proves a success, it will be at the forefront for manufacturing even larger-size production models and have a lead role in this marketplace of the future.

The process has been invented, developed and patented by the Welding Institute (TWI). British Aerospace Airbus is one of more than 20 international member companies of a major group sponsored project led by TWI to speed the method's development and industrial use. The company quickly grasped its potential and in December 1998 placed an order with Crawford-Swift for a machine for its own R&D needs. Crawford-Swift, who won the order against international competition, designed and built Powerstir 360 to a specification provided by British Aerospace Airbus.

The figure "3" in the "Powerstir 360" title refers to its three-axis CNC, and the "60" to its 60kW power rating. There is a fourth, manual axis. This allows the spindle unit - which drives the rotating shouldered welding tool - to tilt by up to 5°. The machine is said to be powerful enough to enable aluminium 100mm thick to be welded together in one pass. It has been designed to withstand high forces of thrust against spindle in all axes Z, X and Y. The machine has a standard toolholder that can take different tools to suit the desired weld configuration. It can also be used for milling.

Jonathan Martin, managing director of Crawford-Swift, said: "Friction stir welding is a relatively new joining process. Other machines are mainly being used on lighter sections. By comparison, Powerstir 360 is a monster, the first big one anywhere. We also believe it to be the most advanced - above all in its control and monitoring facilities. Because the machine is being used for research and development purposes, the customer needs to be able to monitor power, forces, speed, feeds and have far more data than would be necessary on a production machine."

Friction stir welding - how it works

In friction stir welding, a cylindrical shouldered tool with a profiled probe is rotated and slowly plunged into the joint line between two pieces of sheet or plate material, which are butted together. The parts have to be clamped on to a backing bar in a manner that prevents the abutting joint faces from being forced apart. Frictional heat is generated between the wear resistant welding tool and the material of the workpiece. This heat causes the latter to soften without reaching the melting point and allows traversing of the tool along the weld line. The plasticised material is transferred from the leading edge of the tool to the trailing edge of the tool probe and is forged by the intimate contact of the tool shoulder and the pin profile. It leaves a solid phase bond between the two pieces.