Hartzell Propeller Inc. informs us that its propeller systems for the Exxon Flyin' Tiger and the Oracle Turbo Raven helped both aircraft achieve two new propeller-driven time-to-climb records - one for C-1.B class of piston-powered aircraft climbing at an average of almost 4,300 feet per minute and the other an overall record for turboprop aircraft at an average of 6,350 feet per minute.

Bohannon, in the Exxon Flyin' Tiger (Plate 4), set a new record for piston-powered flight to 3,000-meters of 2 minutes and 20 seconds on July 31 at AirVenture '99. For the record attempt the aircraft utilized a three-bladed Hartzell prop which was designed to deliver superior low-speed thrust. It is expected that this will be the first of many record attempts by Bohannon. 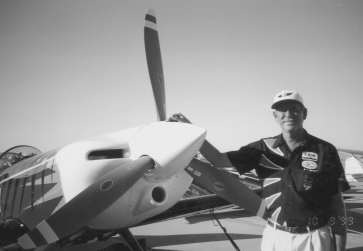 The Turbo Raven, piloted by airshow performer Wayne Handley, set a new record for time to 6,000-meters of 3 minutes and 6 seconds (6,350-feet per minute!) and bested all other propeller-driven climb records. The Turbo Raven had previously set new records for the 3,000-meter mark. Handley utilized a new 100-inch diameter three-bladed composite propeller from Hartzell for the latest attempt. Compared to the previous aluminum Hartzell design which set the 3,000-meter record, Hartzell's latest design was able to increase the aircraft's static thrust by 34 per cent through the use of very wide-chord blade airfoils. Handley's record is all the more impressive as it was set on Friday, July 30 in nearly 100° Fahrenheit heat at AirVenture '99 in Oshkosh, Wisconsin.

Since achieving this mark, Handley encountered a forced hard landing after losing power in the Turbo Raven at the California International Airshow in Salinas on October3. Fortunately, Handley has recovered from injuries sustained in the accident. However, the Oracle Turbo Raven was lost in the crash and Handley has decided to retire from the airshow circuit. Mike Disbrow, vice president of marketing, said:

Hartzell is very proud of its association with Wayne and we are delighted to have played a small role in establishing his name in the record book. Wayne's records in the Turbo Raven will undoubtedly stand for a long time to come.

Hartzell Propeller Inc. is well-known in aviation circles for its propeller systems, also for its advanced engineering and manufacturing capabilities. The company is rich in aviation heritage, tracing its beginnings to relationghips with Orville Wright and Glenn Curtiss. Significant technical innovations include the industry's first full-feathering propeller for light twins, the first fully reversing propellers for corporate turboprops and the industry's first composite structure blades. Hartzell was recently selected by NASA as the exclusive propeller partner for its General Aviation Propulsion (GAP) program, developing the next generation of general aviation propulsion systems. For more information on Hartzell, visit the Web at www.hartzellprop.com