This is a significant, multi-million dollar addition of equipment which, when operational, is expected to help Carpenter improve the uniformity and surface quality of its strip, as well as increase capacity. 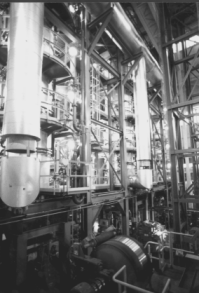 The specialty metals producer reports that it is right on schedule with its modernization and expansion program. All new equipment installations are targeted for completion in the early part of the year. With the new equipment in place and existing equipment upgraded and integrated into the manufacturing process, Carpenter expects to nearly double its capacity for strip products to about 12,000 tons a year.

It will make a wide variety of strip sizes and alloys in strong demand such as magnetic, controlled expansion, resistance and high temperature alloys. In addition, it will make a number of specialty products such as stainless steels and maraging steels that may be considered for applications ranging from aerospace fasteners to medical implants and golf club faces.

The three new strand annealing furnaces, to be placed in production before the end of 1999, will process strip in thickness of 0.005" to 0.187", and in widths ranging from 6" to 16". One furnace is designed to handle heavy gage materials while the other two will handle lighter gage alloys. They will complement older strand annealing furnaces which are to be reconditioned.

Several new design features offer production and quality benefits. Roller exit seals will be used to prevent scratching the surface of soft materials. Entry and exit accumulators will facilitate continuous operation. The increased productivity of the new units is expected to be a key to expanded capacity.

Carpenter has just completed installation of a new six-head wet strip grinder that, eliminating what had been a major bottleneck, has substantially increased the capacity of this process. In addition, the new unit will help the company improve strip surface quality and reduce manufacturing costs.

An Ebner bell furnace, also part of the strip modernization program, has been added and placed into production. It is designed to help the company increase strip heat treating capacity, anneal coils more economically and allow the mill to do more specialized heat treatment for specific customer needs.