People may wonder how on earth something as large and heavy as an aeroplane stays airborne but equally intriguing is how massive components such as the wings are moved around on the ground when they are being made. What connects the two feats is air.

In the case of aircraft manufacture, air film technology is used to float large objects effortlessly a few microns off the ground (Plate 1). It is proving vital to the UK aircraft industry where it is a safer, more efficient transportation method that reduces considerably the risk of damage to the wings or personnel working on them. 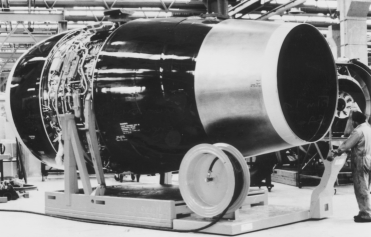 Air film technology itself is simple; according to Hovair Systems it is virtually frictionless and provides flexible, low maintenance and cost-effective transportation, often requiring only a one-man operation. Because very large objects are floated only a short distance off the ground, they are safer when in motion and provide easier access to the component during production. All you need is a standard source of compressed air and a paper-smooth floor surface.

Materials handling specialists, Hovair Systems, has been involved with the aircraft industry for many years. The company has worked closely with BAe since the inception of the Airbus aircraft and its air film equipment has been used to float wing sections of many different models, including the A330 and A340.

Important safety features for control and braking are incorporated into unique projects such as this, making Hovair air skates ideally suited to move large components.

The wings on the A330 and A340 weigh a hefty 50 tonnes each whilst in the rafts used for their construction - an easy challenge for Hovair Systems, novel air film that can reportedly float loads of up to 600 tonnes. The Airbus wings are 70 feet long, 20 feet wide at their widest point and four feet deep at their deepest and are built on their sides. Once assembled, they are floated on the air transporter to another part of the factory to be finished before being shipped to France and Germany for final assembly.

The ten sets of air film equipment used by BAe are fitted to a steel construction raft; each set has polyurethane air bearings on its underside. An air distribution system connected to the air supply inflates the air bearings. As this happens, small amounts of air escape through circular holes to create a few microns of air film for virtually friction-free movement of the raft. Each bearing functions independently, so the transporter can handle off-centre loads where the weight is unevenly distributed.

A spokesman for BAe Airbus said:

The point of load is spread over the entire base of the raft instead of on four or eight small wheels. Moving loads is also safer with air film equipment because at no time is the wing very far off the ground.

A 60 foot high maintenance platform designed and manufactured by Vosper Thornycroft for BAe relies on Hovair air skates to provide a low-effort way of moving it around Airbus aircraft in the hangars by a team of about half a dozen people. Engineers can then gain easy access to all parts of the plane to carry out routine maintenance work.

we chose air skates for their ease of movement, which is important when you are moving such heavy platforms close to expensive aircraft.

The latest application of Hovair Systems' air film technology in the aircraft industry has been at BAe's high security Electronic Warfare Test Facility in Warton, which is used to test a whole aircraft system. The European Fighter Aircraft (EFA) sits on an 18-metre diameter Hovair turntable during Electromagnetic Compatibility (EMC) testing. What is most important here is the fact that the turntable is pneumatically operated using air power and so has few moving parts or electrical components that might interfere with the EMC environment.

A feature of the air film turntable at BAe's test facility is that it floats on upturned air bearings which allow it not only to rotate but also to traverse 5 metres to a second dedicated point of rotation during testing. The turntable has a very low profile - less than 50cm - which made it easy and cost-effective to install.