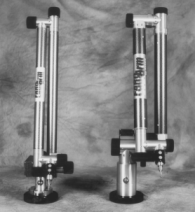 Each FaroArm claims a wealth of features such as on-board digital signal processing for faster data processing, temperature monitoring and compensation of þ5 degrees/5 minutes, and FARO's patented zero reference sphere for custom probe calibration. Additionally, with FARO's on-board options port, accessories such as laser scanners, conductance, and touch trigger probes can be easily incorporated into the FaroArm measurement solution.

Points are collected by touching the probe of the articulated arm along the surface of any object, and are captured by the touch of two buttons on the probe's pistolgrip handle. Transducers at each of six joints combine to report three-dimensional data, giving the position (X, Y, Z) and orientation (I, J, K) of points. The collected data are read by FARO's own AnthroCAM software - a powerful, 3D CAD-based measurement, reverse-engineering, design and analysis package.