The Lord and Lady Mayoress of Sheffield recently visited Doncasters Bramah at Halfway, Sheffield to officially switch on their new, state-of-the-art laser (Plate 7).

The laser is a £750,000 investment, capable of machining complex three-dimensional shapes in nickel and titanium alloys. It offers higher speeds and greater accuracy than conventional machining and other benefits include reduced variation and quieter operation. 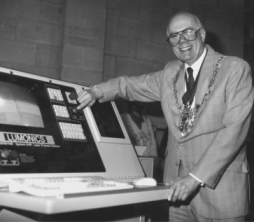