Vickers Airmotive, based in Shrewsbury, specialises in the repair and overhaul of hot-section turbine components, and has developed a range of manufacturer approved repair programmes in conjunction with aeroengine, industrial and marine engine manufacturers and operators throughout the world.

Continuing growth in the aeroengine repair and overhaul market, in particular, recently prompted the company to upgrade its surface preparation facility with the installation of a USF Vacu-Blast "Vector 150P" automatic abrasive blasting machine (Plate 3) to streamline the surface preparation of combustion chamber sections, prior to magnesium-zirconium plasma spray treatment. The fully programmable machine replaces an older manual Vacu-Blast abrasive blasting cabinet which is still used for general surface preparation and cleaning. Because the new Vector machine is fully automatic, the operator can undertake other tasks whilst the machine is working. 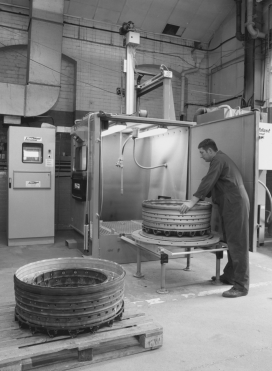 The Vector machine utilises USF Vacu-Blast's "Vacutrol" Windows based machine control system, with user-friendly software which allows a wide variety of different component processing parameters to be input via a touch-screen menu. The machine operates on the pressure-fed principle, has a 1,500mm x 1,500mm x 1,600mm high processing enclosure, and incorporates a two-axis nozzle manipulator. It also features a Vacu-Blast "Waffle-Floor" media recovery system. This collects the spent aluminium oxide media, dust and debris continuously during the blasting process and conveys it pneumatically to the machine's generator-reclaimer unit, where reusable media are separated out automatically and recycled to the blast nozzle. Degraded media, dust and debris are directed to a COSHH-compliant dust collector for safe disposal.

The combustion chamber sections are processed on a powered 250kg capacity turntable which rolls in and out of the enclosure to facilitate loading and unloading through the 1,420mm wide by 1,550mm high safety-interlocked access door. Acoustic protection ensures that the machine's noise level does not exceed 78dbA.

Prior to specifying the USF Vacu-Blast Vector machine, the company considered the alternative surface preparation processes of acid stripping and waterjet cleaning, but rejected the former because of potential substrate damage and operator hazards, and the latter - the most expensive option - on cost grounds.