LK Ltd informs us that the centri-spun, near-net-shape castings produced by Sheffield based Doncasters FVC for General Electric's CF34 aircraft engine compressor casings are now checked in-house in three and a half hours using an LK co-ordinate measuring machine (CMM) (Plate 2). Previously the same component took eight hours to inspect on another manufacturer's CMM at a sister Doncaster group company nearby.

A light ceramic construction and fast vector speeds up to 48m/min on the LK G-90C are said to be central to the machine's ability to complete the complex routine so quickly. The casing, of 18 inches maximum cast diameter and 22 inches tall, is produced in two halves and is checked around its entire internal and external profile. Results collected from the continuous scanning routine are manipulated using LK's Digigraph data analysis software. 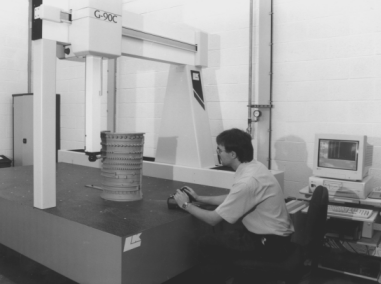 Three datum points are taken on the top rim to orientate the component. Then the semi-circular bore, which has a 50 thou tolerance, is relatively quick to check. However, the external features are complicated and consume the majority of the inspection time. They comprise 18 different diameters over the depth of the casting interspersed by six horizontal rows of bosses varying in number from 38 at the bottom to 19 at the top. All radii have to be within þ25 thou and every boss must be inspected to ensure that it is within 50 thou of true position. In addition, there are manifold areas at the base which need to be measured.

Normally castings would not need to be so precise but, as these are very close to the dimensions of the finished compressor casings, there is little opportunity for GE or its subcontractors in the USA to machine out inaccuracies.

The LK CMM was installed in January last year specifically for 100 per cent checking of these Jethete castings on the advice of Alan Clark at Doncaster plc head office, who had used a similar machine for checking turbine blades at another group company. In charge of quality control on the Sheffield site is Simon Bates, who commented that LK was one of the few suppliers to support fully the DMIS programming language.

The big advantage of this to Doncaster's FVC is that the output from its PROSURF computer aided design system may be used directly to create an inspection program for the CMM, without translation. A second, smaller compressor casing is about to come on-stream at the Sheffield foundry and MrBates will be required to prepare the program, the first he will have written as LK supplied the CF34 program with the machine. DMIS compatibility will therefore be of considerable assistance.

Inspection capacity on the CMM is high as it is double shifted (6am-2pm/2pm-10pm) and Mr Bates takes advantage of extra time after the second shift by leaving the machine to complete the casting on the table. Results are said to be so reliabe that the intention shortly is to move away from 100 per cent checking by using the CMM to control the centrispinning casting process. This will enable sample checking and allow the possibility for a variety of other components to be put on the machine.