Brookhouse Patterns Ltd has recently completed the design and manufacture of a precisely engineered assembly jig (Plate 3) to be used by Matra Marconi Space, of Stevenage, in the production of the service module for the Metop meteorology and climate monitoring satellite, being built for the European Space Agency. 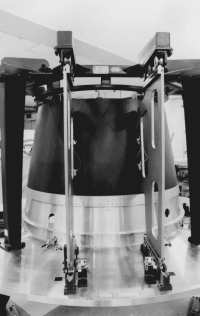 Matra Marconi Space is the prime contractor for the Metop project, which will provide high resolution Earth observation and atmospheric data, as well as being used as a location satellite to help in search and rescue missions. More specifically, Matra Marconi has responsibility for the manufacture of the service module, which provides the in-orbit, house-keeping functions, such as power, attitude control and communications, whilst supporting the payload module. It is also the interface with the Ariane 5 launch vehicle.

The assembly of the service module is both a delicate and a precise operation, which is performed with the assistance of support and positioning jigs. It is carried out in two stages. First of all, the central thrust cone is assembled by bonding top and bottom thrust and support rings to a composite central cone. The primary purpose of the lower ring is to provide the interface between the launch vehicle and the spacecraft, whilst transmitting the substantial thrust forces experienced on launch. The upper ring supports the spacecraft payload module. It is essential that the jig precisely positions these two rings horizontally and parallel to each other during assembly. It is also necessary for technicians to have access to the inside of the assembly to effect the cone/ring bonding. First stage assembly also involves the precise positioning of orientation keyways and the bonding of angularly displaced attachment brackets. These are used in the second stage of structural assembly, which requires a second jig for the accurate positioning of a set of structural panels and equipment hard points, which are assembled to form the service module.

Having seen evidence of Brookhouse's capabilities and expertise in producing components, tools and jigs for the aerospace sector at the 1998 Farborough International Air Show, Matra Marconi Space decided to sub-contract the design and manufacture of the assembly jigs to the Darwen-based company.

As a result, Brookhouse was provided with a detailed drawing of the finished module and, working closely with MMS engineers, used this to devise the optimum assembly process. The jigs were then designed using the extensive CAD facilities at Darwen. The first jig has now been manufactured and delivered to Stevenage as a welded metal fabrication to tolerances of ±0.025mm, with all measurement and verification being performed using laser tracking technology. The complete design and manufacture process took just three months, from initial concept to delivery.