Munters, the humidity control specialist, informs us that it has won a prestigious contract worth in excess of £1 million from the UK's Ministry of Defence to supply the RAF and Royal Fleet Air Arm with several hundred portable dehumidifiers (Plate 2). 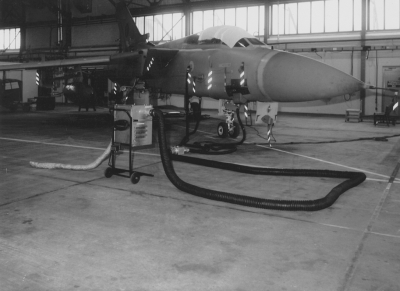 According to Munters, when aircraft are on the ground the dehumidifiers will protect their avionics from potentially damaging moisture regardless of the climate - aircraft are exposed to various conditions throughout the world while they are operational. The controlled environment generated by the dehumidifiers reportedly improves engine reliability, extends flying hours and reduces the number of spare parts required.

Munters robust MH300M portable dehumidifiers will be employed in a variety of fast jets including Tornadoes, Harriers and Jaguars, as well as helicopters such as the Lynx. These aircraft operate in climates ranging from the tropics in Asia to the Arctic conditions found in Canada.

When a jet is on the ground a dehumidifier can simply be coupled to the aircraft and it will maintain atmosphere inside the plane at 45 per cent relative humidity - this simulates desert conditions.

Under these conditions, the aircraft's avionics are said to be maintained in pristine condition thereby increasing the time between engine services and/or failures. At the same time metallic components are also said to be protected, as the relative humidity is well below the 50 per cent level at which corrosion begins.

This contract demonstrates the type of partnership relationship that Munters establishes with important customers such as the Ministry of Defence. These lightweight portable dehumidifiers are one of our latest developments and are ideal for the rugged conditions encountered by the RAF on a day-by-day basis. Lowering the humidity inside the aircraft offers the service significant cost savings as well as extending flying hours.

Munter's high performance MH300M dehumidifier operates at 300m3 per hour. It is believed to be easily maintained - there are said to be few components to fail, and it employs no CFCs.

The company offers a variety of desiccant dehumidifier packages. The MX range is reported to process air flows ranging from 1,500m3 per hour to 7,600m3 per hour. Damp air is drawn through an internally sealed drying wheel containing a highly efficient desiccant that removes water from the air. The wheel operates at high capacity, thereby recovering heat while simultaneously reducing the electrical power requirement. An advanced control system optimises the unit's energy efficiency.