Ferranti Technologies Limited (FTL) reports that it has launched the FTS-10A inertial grade accelerometer for aeronautical and terrestrial navigation and positioning systems (Plate 3). Ferranti believes that system manufacturers can now take advantage of this high performance device, thought to be the first of its kind in Europe. By incorporating specially-developed super alloys with proven flexure hinge-based accelerometer technology, the FTS-10A claims high performance combined with long-term stability and reliability at low cost. 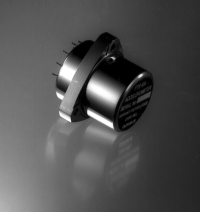 The FTS-10A has been developed and manufactured in the UK to meet the growing demand for a European source of high-performance inertial grade accelerometers ... It is not only aeronautical and terrestrial strap-down navigation system manufacturers that will benefit - there are many applications for the FTS-10A in flight control, missile guidance and precision stabilization systems too.

Ferranti explains that the FTS-10A is a small (diameter, 25mm; length, 30mm; mass: 80g) servo pendular-type accelerometer offering precision sensing. Its operating voltage range is stated to be ±15 to ±28V dc with a temperature range of -55°C to +100°C. Use of a nickel-plated Mu-metal enclosure reportedly gives the FTS-10A an exceptional degree of immunity to external magnetic influences. The scale factor is stated to be 1.1 to 1.6mA/g with a non-linearity of 20µg/g2 and temperature sensitivity of 125ppm/°C with a repeatability of 200ppm (one year). The bias (3mg) has a temperature sensitivity of 30µg/°C and repeatability of 120µg (one year). The accelerometer operates with an axis misalignment of 10mrad in a range of ±25g.

The FTS-10A joins a wide range of precision sensors designed, developed and manufactured by FTL.