Partnering agreements are usually seen as something large companies negotiate with their main suppliers. They are not something a relatively small £4 million turnover machinist subcontractor with 44 employees normally gets up to with its suppliers. However, we are told, in the case of Verdict Aerospace, what is good for its main blue chip customers is now proving to be good for its machine tool supplier, Hitachi Seiki of Egham in Surrey.

In the fight to cut costs and improve quality and reliability, many large manufacturers have abandoned the habit of throwing work "over the wall" with subcontractors competing head to head for the lowest price. Instead, these blue chip companies have moved to "strategic partnering" in which work is allocated among a few carefully chosen "preferred" suppliers, and prices are negotiated in an "open book" atmosphere. The results have been improved component quality and reliability due to greater supplier involvement and commitment, leading to lower overall procurement costs.

It took Alan Addis, owner of Verdict Aerospace, of Chalfont St Peter, three years of working with one of its aerospace customers before they signed a formal written partnering agreement last year. Under this, Verdict is now just one of three European preferred subcontractors for machining high precision aerospace components in a range of exotic materials including beryllium and aluminium-beryllium alloy. 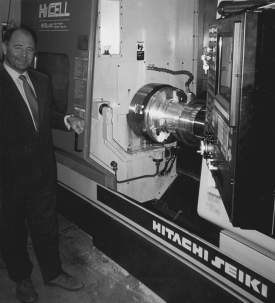 Alan Addis, who bought the company from his father in 1985, says:

Ten years later he moved the company from London to its present site in the sixteenth century historic Buckinghamshire village of Chalfont St Peter.

He goes on to outline:

Before the agreement with one of our major aerospace customers, we took on a three-year contract with them for £1.25 million. It ran in parallel with a similar job taken by a competitor who charged £150,000 less. However, at the end of the three years we did not drop once on quality or delivery. The competitor did. Their job ended up with a project through life cost to the customer that was some £250,000 more than ours.

It is a similar story with machine tools, he believes:

We expect the same from our suppliers as we give our customers. We may pay a slightly higher premium for Hitachi Seiki machines than competing models, but the overall cost of ownership is noticeably less.

He readily admits that he pushed Hitachi Seiki to the limit with his first machine, an HC400 horizontal machining centre:

We were having problems holding tolerance on a job which was right on the edge of the machine specification and Hitachi Seiki could have left us holding the baby. But they said they would do all they could to help and stunned me by flying in a specialist from Fanuc in Japan, at no cost to us, to adjust the control system and solve our problem ... Last year, on the afternoon before Good Friday, we agreed with a customer to work all Easter weekend. Then at 7 pm we had a machine problem. But within an hour, a senior engineer from Hitachi Seiki was here and the machine was back up and running again by midnight ... That is a prime indicator of the overall commitment we have from Hitachi Seiki. They know they are our preferred supplier and you cannot compare that level of support against discounts.

Now, whenever Alan Addis gets an enquiry from a customer he can ring up Hitachi Seiki to discuss the best machine for the job before he puts in a bid. He says:

We decide whether we can do it with our existing machines or whether I need to buy new and we have a totally "open book" policy when negotiating prices.

One of the benefits for Verdict of partnering is that customers can see from the shopfloor the extent of the company's commitment to its machine tool supplier. He maintains:

They recognise that Hitachi Seiki is "world-class", and when they see our commitment it gives them confidence which reduces their risk.

In return, Verdict has become something of a second showroom for Hitachi Seiki machines. He adds:

We even had one customer who came here and saw our machines and promptly went out and bought HICELLs himself.

However, there are advantages, as he describes one aerospace OEM that is tying in the production of components to the most appropriate machine tools they think will do the best job. They have been seeking to identify the subcontractors that have bought certain machines. For one particular mill-turned part, they have decided that the HICELL is the ideal machine specified to produce it.

This has opened the door and the company is now talking to us about producing certain parts for an engine. But they would not have even entered our building if it was not for the Hitachi Seiki machines we have installed.