Computer simulation has led to a breakthrough in the design of gas turbine engines. By simulating the design of the duct carrying gases from compressor to turbine, engineers have developed a new duct shape offering greater fuel efficiency than conventional duct designs.

Until now, "U"-shaped bifurcated transition ducts have been used almost exclusively in industrial gas turbine engines. Alternative "tuba" scroll shapes offering greater fuel efficiency, while possible on smaller turbines, were impossible to construct for large industrial turbines. Using Gridgen - a computational fluid dynamics package available in the UK from Applied Computing and Engineering in Warrington, Cheshire - the Allison Engine company has "fine-tuned" the "tuba" design (Plate 3) and is now planning to use the duct in the development of its new generation of low NOx power generation turbines. 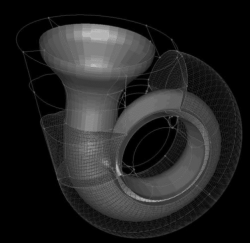 Research has shown that the flow pattern and distribution of these gases as they enter the turbine are a crucial factor in the engine's performance. The temperature, flow and pressure of the gases should be distributed as uniformly as possible across the exit of the transition duct where it enters the turbine to achieve maximum power from a given quantity of combustion gas.

Many existing industrial power generation engines use a bifurcated transition duct shaped like the letter "U". The combustor is connected to the transition at the bottom of the "U" and the two arms of the "U" form a ring connecting to the turbine. The problem with this approach is that the flow angle or the direction of the swirl in the two flow channels is inherently in the opposite direction. This reduces the efficiency of the turbine. Also the hot gases coming out of the combustor by necessity impinge on the bifurcated transition duct on the centre of the wall opposite the inlet, shortening the life of the duct.

The primary alternative to the bifurcated transition duct is a scroll shape, which looks like a tuba or a snail shell. The inlet of the tuba or head of the snail shell is where hot gases from the combustor enter the device. Gases flow through the helical body of the scroll and are redirected into the turbine. A key advantage of the scroll is that the device inherently provides a constant flow angle at the turbine inlet.

Engineers also have the ability to fine-tune the helical transition duct to provide excellent flow, pressure and temperature distributions. But engine manufacturers that have tried to develop scroll transitions ducts have in most cases given up because of difficulties in developing the intricate geometric details of the scroll. To date, this type of transition duct has only been successfully used on very small engines where the geometrical issues are less involved.

One of the major problems faced by the earlier generation of scroll designers was the time and expense required to build a scroll prototype and the difficulty of making more than just a few experimental measurements. Computational fluid dynamics (CFD) simulations have developed to the point where they are able to provide fluid velocity, flow direction, pressure and temperature values throughout the solution domain for time-dependent problems with complex geometries and boundary conditions.

By simulating the problem on the computer using Gridgen, the engineer can easily change the geometry of the model and the boundary conditions, such as inlet velocity, flow rate, etc. and view the effect on engine performance.

Gridgen also helped overcome the problem caused by the transition from the large cross-section of the combustor exit to the smaller cross-section where the scroll wraps back on itself, forming an annulus to meet with the turbine. The density or number of cells in the grid is very important because a finer mesh increases accuracy but also substantially increases the run time of the analysis. The problem was that a mesh that was fine enough to provide accuracy in the larger diameter area near the combustor would have so many cells in the smaller diameter area that the analysis would take too long to run.

Gridgen allowed the scroll's geometry to be broken down into contiguous sub-domains called blocks. Using separate blocks for regions where the casing volume varied, the engineers made it possible to maintain the mesh at a nearly uniform density throughout the casing. In this way, they were able to achieve the accuracy that they needed in the large diameter area without burdening the smaller diameter areas with an excess of elements that would slow down solution times.

The irregularity of the scroll geometry meant that the initial grid had areas of negative volume that would have made it impossible to analyze. With a conventional grid generator, Allison engineers would have been forced to modify the grid cell by cell to improve its quality, a process that would have taken weeks. Fortunately, Gridgen provides an elliptic smoother that allowed engineers to improve the quality of the mesh by automatically applying elliptic partial differential equation methods.

Engineers applied smoothness, clustering and orthogonality controls to improve the mesh. With each iteration of mesh improvement, the software provided a color-coded graphical display of negative and skewed volume cells. In only about an hour, they had refined the grid, producing a high quality mesh ready for computational analysis.

The first analysis of the scroll interior showed that the design produced by using an in-house FORTRAN program was quite good in terms of flow velocity, direction of flow, mass distribution and pressure distribution. The analysis of the exterior flow field highlighted some unevenness that was fixed by making adjustments to the geometry. Gridgen streamlines this process by regenerating the volume grid whenever changes are made to the geometry or grid that would affect that block. The CFD results were used as boundary conditions for a heat transfer analysis that defined local cooling flux requirements for the scroll transition. The resulting design is clearly superior to the conventional approach and is being used on a new generation of low NOx power generation turbines.

Allison Engine designs, manufactures, markets and supports gas turbine engines and components for aviation, marine and industrial applications. Over 140,000 engines have been produced including large turboprops for aircraft such as the C-130H Hercules, P-3 Orion and E-2 Hawkeye through to turbofans for medium to large business jets and jet-powered regional aircraft such as the Embraer RJ135 and RJ145.

Formed in 1987, Applied Computing and Engineering is a leading supplier of simulation technology to major UK and European organisations.

From its Warrington headquarters, Applied Computing and Engineering works closely with other specialist organisations from around the world offering a wide range of simulation programs for:

Consultancy services in addition to the above include general Computational Fluid Dynamics studies (specialist applications or overflow work) and visualisation and animation projects.