A new extension to its manufacturing plant has been set up by Langford Lodge Engineering in Crumlin specifically to produce kits of mainly stainless steel components and deliver them directly to Lucas Aerospace driveshaft assembly lines in Wolverhampton. The long-term agreement is expected to increase the subcontractor's workforce of 240 by one sixth and will help to secure Northern Ireland's position as a leading supply base to the aerospace industry worldwide.

Four Index G300 mill-turning centres with bar magazines supplied by Geo. Kingsbury and a Pfauter splining machine form the core of the machining capability (Plate 4). Although three of the lathes were ordered as recently as January last year (1998), all components were proved and in two-shift production by September. The fourth G300 was installed in January 1999. 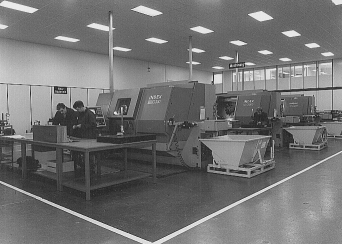 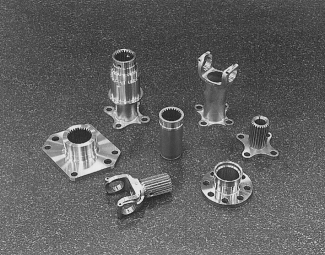 Plate 5 A selection of aerospace components which have undergone turning and prismatic machining on the index G300s at Langford Lodge Engineering. Holes in the fork ends of the components back right and front left have been circular interpolated using the Y and Z axes

Langford Lodge has for some time successfully operated six Index lathes for the production of cartridge cases used in ejector seats manufactured by its customer, Martin Baker Aircraft Company (Plate 5). It is also a subcontract supplier of parts to Bombardier Aerospace - Shorts, Belfast. Gary McAreavey, operations manager at the Crumlin plant, said:

We chose the same machine tool supplier for this project as the lathes were shown to be capable of turning 65mm diameter stainless steel bar and completing all milling operations in one set-up, reliably, accurately and consistently despite the high workloads.

The twin-turret, opposed-spindle, nine-axis CNC machines uniquely have four computer controlled axes on the top turret - X, Y, Z and B - which in combination with live tooling allow complex components to be produced in one hit. For example, a precision, 15mm diameter cross-hole is required through the fork ends in many components. The B-axis allows the turret, which normally serves the main spindle, to rotate to the counter spindle working position, while the Y and Z axis movements are used to interpolate the holes. Simultaneous machining using both turrets at either spindle is possible to reduce cycle times.

Materials used in the cell are AMS 5643 weldable stainless steel, AMS 5343 cast equivalent and S143 non-weldable steel. Average batch size is 150 off and cycle times vary from 2.5 to 12 minutes. General drawing tolerance is 0.125 mm, the tightest being 10 microns. In addition, a good surface finish of 32 CLA is required.

Langford Lodge is well placed to meet the exacting standards of Lucas Aerospace through its business strategy of offering customers a high level partnership based on long-term agreements. A managed solution is provided from order receipt to delivery in custom packaging, including procurement, product development, quality assurance and materials requirement planning. The co-operation between customer and supplier goes even further to encompass the selection of machinery, personnel recruitment and training, and establishment of the production unit itself.

Reflecting this partnership approach, Geo. Kingsbury undertook the project to equip the facility, called the Wingset Supply Module, under a turnkey supply contract and take responsibility for its successful implementation. The company worked closely with Forkardt to provide all the fixturing. Over 30 components, some of them very complicated, were programmed, tooled and proved by the machine supplier with input and approval by Langford Lodge engineers. Moreover, Geo. Kingsbury has commissioned a local service engineer to look after the machines throughout their warranty period.