At the Royal Air Force's main servicing base in St Athan, South Wales, where major aircraft overhauls are carried out, a calibration laboratory has been set up to act as a central facility to which all the RAF's aircraft jigs and media (AJAM) are sent for verification. Supporting this function is a co-ordinate measuring machine (CMM) from LK Limited, Castle Donington, which has supplied a total of three machines to the base.

Hitherto, each individual engineering squadron around the UK used to check its own jigs, fixtures and media in the hangar using conventional metrology equipment such as height gauges, verniers and micrometers. Indeed, St Athan engineers did the same. But ever advancing technology and the higher accuracies which accompany it have gradually rendered this approach inadequate.

So during mid-1996, the RAF's AJAM task was awarded to St Athan. To help it win the business and support the increased workload, an LK G80-C 15.10.8 CMM had been installed a few months earlier to upgrade the base's metrology capability (Plates 2 and 3). The majority of work requires accuracies of the order of 20 microns to be measured, although some components are checked to tolerances four times tighter. 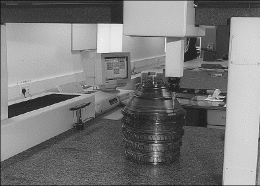 Plate 2 A compressor drum being automatically inspected on the LK G-80C CMM, for which a six-station automatic probe changer has been purchased 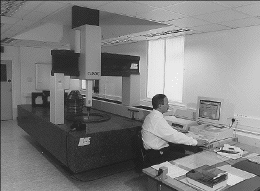 Said Adrian Ritchie, calibration manager at RAF St Athan, "We knew we would need to improve our measuring facilities and become ISO 9000-registered, not only to stand a chance of winning the AJAM contract, but also to retain it against competition from outside the Armed Forces.

"Another squadron on site has used an LK CMM for over ten years very successfully to measure aircraft components which have been taken out of service for refurbishment, such as powered flying control units and wing sweep actuators. We considered what all the other leading CMM companies had to offer and eventually decided to buy another LK machine."

The latest CMM to be installed at RAF St Athan is a G-90C for "engine overall inspection tasks". Delivered in June 1997, it will allow considerable savings to be made in the inspection of aircraft engine components.

CNC software is compatible across all generations of LK CMM, allowing programs produced on one machine to run on another despite their age differences. The Visual CMES software with its full suite of teach/learn capabilities is said to be particularly easy to use. Staff with little or no prior knowledge of computer-controlled CMM equipment are able to produce good quality work inside one week.

Now that the calibration department at St Athan is familiar with the capabilities of this software, the operators are going for full CMES training at LK to familiarise themselves with the language which controls the machines. This will allow savings to be made when writing programs and will result in even shorter inspection routines.

Uncomplicated one-off components, such as annular drilling jigs for engine components, are inspected manually on the CMM as measurements can be completed in less than the time taken to write a program and then inspect the component under CNC.

Routines for more complicated pads, like a compressor drum jig used for testing compressor blades, are programmed using the teach-in method and inspected automatically in cycles which can take as long as two hours to complete. Renishaw TP200 probes are used, for which a six-station automatic probe changer has been purchased. For complex work, all six probes would be employed in an automatic inspection routine.

Currently, Mr Ritchie's laboratory operates on a single shift, five days a week. However, they are still in the process of preparing and compiling performance specification documents on all AJAM equipment held at RAF bases around the country and work is building up. Once this project is complete, it may be necessary to introduce a double shift system to cope with the increased workload. Any spare capacity will be devoted to subcontract inspection from the commercial aerospace sector and from industry generally.