The recently introduced PHL 1600 handheld laser terminal from Opticon Limited is said to be providing considerable benefits for a stocktaking application (Plate 3). In some cases it is reported that operations that once took anything from eight to ten hours have been dramatically reduced to a speedy 60 to 90 minute process. It is believed to be ideal for stocktaking aircraft components. 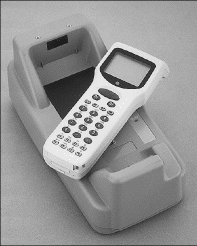 The terminal has a powerful 1Mb of "true" memory, as there is a separate memory for programming, it is lightweight and easy to handle, will scan and decode most popular barcode symbologies at a rate of 100 per second and has a built-in IrDa interface.

Information can be downloaded to the host via the cradle using RS232 or alternatively directly to either a computer terminal, notebook, or portable terminals that use an IrDa interface (this means that the terminal can communicate data/programs or receive data/programs by simply pointing at the notebook/PC or even another PHL device and depressing the appropriate key).