Components are manufactured at GKN Westland for several aerospace manufacturers, including Boeing, Northrop, Rockwell, Airbus and Short in Belfast, and include parts for door beams and wing assemblies on (for example) the Boeing 737 and 747. The components are therefore large and complex in shape, and frequently require machining (after the forming operation has been completed) at angles which would not be possible on a less versatile machine. 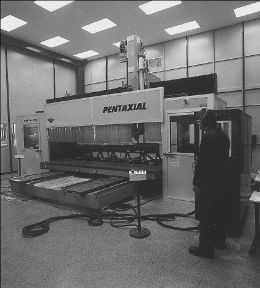 "These contracts made it necessary for GKN Westland to have new machines and technology capable of machining normal to surface", said Nick Belbin, product line manager for details and sub-assembly. "These are very, very tight tolerances in aluminium ­ tolerances which we and most other companies have never had to work to in the sheet metal industry."

The degree of precision required extended to many different operations, but notable among them was the drilling of holes in the components and the trimming of aluminium pressings to precise dimensions. Initially, some of the work was put out to precision sub-contractors while the project team set about finding the right machine capable of handling all the machining operations necessary to the tolerances required.

"We made all the usual approaches to about a dozen manufacturers, then met Rye at an exhibition", said Nick Belbin. "They were one of eight potential suppliers whose machines were evaluated during the purchasing process".

"It was clear from the start that Rye had the right approach to our requirements", he said. "They were flexible and prepared to work at achieving exactly the right specification."

Nick Belbin and the other members of the project team talked to other users of Rye machines before deciding to buy, and emphasise that they retained an open mind on the issue of whether to buy British.

The Rye Pentaxial, which was installed during the spring of 1996, has twin tables each 2mm × 2mm which can be used either on a shuttle basis to speed loading and unloading and maximise cutting time, or be locked together to create one large table. Equipped with a BWO CNC900 controller, the machine has a 12-station toolchanger, making it possible to run complex machining programs which include several tool changes without interruption of machining.

The two tables run lengthwise through a fixed bridge, either separately or locked together, with feed speeds of up to 20 metres per minute. A special rapid positioning facility reportedly makes it possible to move the tables at 24 metres per minute. The controller has a built-in "teach-in" facility and a number of key features to boost efficiency.

After the head has been tilted, for example, there is automatic compensation for co-ordinate points which have been "taught in" with the head positioned vertically. The controller will also define a shape in the main machine's X, Y and Z axes and translate it through compound angles without any reprogramming. This has particular benefits, for example, when cutting circles on angular faces.

It is also said to be possible to treat a drilling or plungecutting stroke at a compound angle as a simple Z-axis movement, with the angle being automatically compensated for in all the other axes.

"We're achieving faster set-up than I ever expected because of the twin tables", said Nick Belbin. "And, of course, we no longer have to sub-contract the high-precision machining, which saves the company a great deal of money".