A cross section of top aviation students ­ who may prove to be the future population of Europe's aerospace industry ­ have recently completed the design of a new aero engine ... during their summer vacation!

The 30-strong Euroavia group ­ comprising top students from 17 universities in 11 different countries ­ allowed themselves three weeks to run their biennial design workshop that this year looked to design an engine for a new regional aircraft.

After 18 months of detailed planning, they travelled in late July to Derby in England, home of aero-engine giant Rolls-Royce and of the University of Derby, which is looking to raise its engineering and technology reputation and was able to offer excellent support and accommodation facilities. 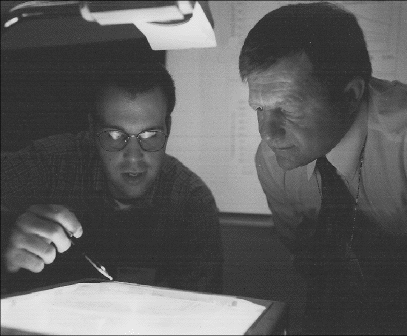 Project director, Geoff Kirk (right) held a critical design review at the end of each week

Even to stand a chance of being on the trip, each student had to display their commitment to aerospace by writing an essay on an aeronautical subject which was stringently judged. Only the most impressive entries were accepted as participants.

The workshop project had to meet some very particular predetermined design and market criteria, and even had to decide whether to use a turbofan or turboprop engine type. The first week included several lectures from academic and industry mentors as well as design sessions that continued all through the second week, each day finishing with a daily review and wide-ranging discussions.

At the end of each week a critical design review was held, when the "Project director" ­ senior Rolls-Royce engineer Geoff Kirk ­ assembled a team to assess the group's progress and advise on the way forward.

One of the chief sponsors of the design workshop was the Society of British Aerospace Companies (SBAC). Its director general David Marshall said:

"We were particularly impressed by the students' commitment and enthusiasm. The amount of organisational work that went in was enormous.

The real value of the Workshop must lie in the teamwork displayed across disciplines and nationalities. Ventures such as this bode well for the future and we can only hope that students of this calibre will joint the industry in some capacity on completing their studies."

The final act of the three-week exercise was a presentation of the overall project at Rolls-Royce's Sir Henry Royce Centre in Derby. Group spokeswoman Stefania Gualdi said that to finish was a mixture of relief and sadness that such an intensive, focused team effort had come to an end.

Even so, she added, it was not all hard work:

"We had an enjoyable trip to London, visited Rolls-Royce and the University of Cranfield, had time to do a little socialising at weekends and the occasional evening and, I'm sorry to say, finished second best to Rolls-Royce apprentices in a soccer challenge that we lost 12-1! I must also say the rumours of the British weather were not entirely true ... we hardly used the woolly jumpers that everyone brought with them!" 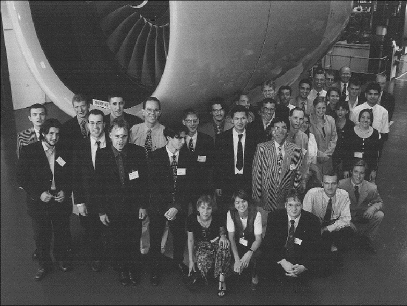 The project in detail

Euroavia's design workshop is held roughly every two years, and is a triumph of self-driven enthusiasm for aerospace and organisational ability. This year's project took as its storyline a company issuing an RFP (request for proposal) for an engine for a regional aircraft. It had to meet a particular specification in terms of key criteria such as fuel burn, power output, weight and cost set by "the customer" (in this case "project director" Geoff Kirk, whose normal job is chief design engineer for Rolls-Royce's commercial engines business).

They had to choose a design to meet "the spec", beginning with a preliminary design of compressors, turbines and the combustion system. They split into project groups, each with its own chief engineer, to tackle these tasks, another group also looking at marketing considerations. Initially they looked at turbofan and turboprop options, but fairly quickly settled on a turbofan configuration. 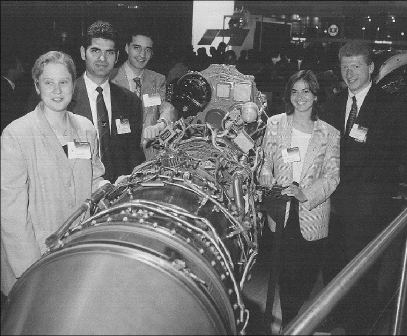 Seen on the Rolls-Royce stand, five members of the Euroavia group who attended last year's Paris Airshow to promote the Euroavia project

After the project was over, Geoff Kirk said:

"Initially, the group thought design was just about applying formulae to a problem and an answer would result. They soon learned that many other things are important, adopting teamwork and gradually coming to understand there was no unique solution.

They realised the importance of planning, and that decisions have to be taken sometimes without all the data necessarily being in place at the ideal time. Then it comes down to considered and informed judgement ­ that's life in the real world!

As well as the technical task, the exercise will have proved to be invaluable in building the team approach to a problem. Teamwork is key when working together intensively for three weeks: this particular group to begin with did not got their priorities right ­ soon realising how essential it was to get the right team working on the right thing at the right time. I am now looking forward to seeing their completed design report.

They'd do a better job still next time, but that's what learning and experience is all about, and I believe this was an excellent group both managerially and technically."

Rolls-Royce project co-ordinator Jim Wickerson added that the workshop had been a valuable exercise all round:

"Already we're looking to adapt some of the principles of the Euroavia experience to our training methods. Such a large project certainly pushes the intellect and stamina to the limit, so we'd find a lot out about our own graduate trainees, numbers of whom are 110 this year ­ and rising.

Also our own engineers benefited as they had to think logically about how to pass on their own knowledge and describe their own experiences if they were to help the Euroavia group effectively."