In today's global aircraft manufacturing industry, advanced technology assembly (ATA) and advanced fuselage assembly allow components and sub-assemblies to be delivered straight to the production line. Provided that tight manufacturing tolerances are complied with, it is possible to put the aeroplane together without any individual fitting of parts. This greatly speeds production, allowing Boeing for example to produce the 747 and 737 airliner family in quantities of tens per month.

In 1996, when Yeovil-based GKN Westland Aerospace won a major contract from Boeing to supply door edge beams, a major review of manufacturing and inspection methods was needed to allow production to keep pace with customer demand for over 20 aircraft sets per month.

Whereas the structures department at Yeovil had previously been accustomed to relatively small batch throughputs which can be checked by reference to full-scale loft models, the quantities associated with this contract and the traceability requirements of the customer demanded automatic inspection using a co-ordinate measuring machine (CMM). After an interim phase during which the department borrowed capacity on another CMM within the company, it acquired its own LK G-90C specifically for the contract.

"Components are manufactured from sheet aluminium which is initially CNC routed to provide the flat pattern, then formed using advanced fluid pressing facilities and finally five-axis machined for component trimming and inclusion of features.

Tolerances on the edge beams vary from ±0.030in on the basic shape to ±0.010in on feature positions and down to ±0.004in on tooling holes used to locate the part (which can be 14ft long) for machining. Meeting ATA requirements demands a very high level of repeatability between parts which simply cannot be verified without CMM inspection."

Westland Aerospace is one of the UK's leading manufacturers of sub-assemblies for military and commercial aircraft. The company is a key supplier to SAAB Aerospace, McDonnell Douglas and Shorts as well as being both a first and second tier supplier to Boeing. Components are manufactured from aerospace grade aluminium sheet which ranges in thickness from 0.040-0.100in.

"On the principal job allocated to the CMM there are eight separate components per aircraft set. These are subjected to a first-off CMM inspection after routing to verify the NC programme and a 100 per cent check of surfaces, holes and lengths prior to the customer buy-off of the batch. The inspection demands are comprehensive while the tolerances needed for ATA are much tighter than those required for conventional airframe work."

At the start of the contract, Mr Lacey and his colleagues had temporary access to a very large (10m in X) LK Metre 4 CMM which its sister company uses to check helicopter rotor blades. Having developed a number of checking programs for use on this machine and being satisfied with its performance, the choice of an LK G-90C as Westland Aerospace's own machine was simplified.

To accommodate the long components and associated fixtures in pairs, the G-90C machine was supplied with a work envelope of 4m × 1.5m × 1m. Other features of the machine include a Renishaw PH-10 probe head with TP200 probe and a six-stylus magazine for automatic tip exchange.

The latter is fully utilised as the components include a variety of features which demand customised probing for access. Automatic exchange minimises the time absorbed by probe re-qualification. Consistent measuring accuracy is assured by housing the machine in a purpose built, air-conditioned environment. 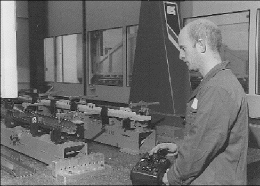 Programme development for the machine is carried out off-line using an adaptation of the five-axis machining module within the company's CATIA CAD/CAM system. A customised processor is then used to convert the program into a format that can be understood by the LK's CMES language. This method of programming has proved around 95 per cent effective and significantly reduces machine time dedicated to program development.

"The G-90C has been highly successful in providing us with an accurate inspection tool that is fast enough to keep pace with production requirements. As well as door edge beams we also manufacture aircraft spars and a variety of smaller components for which similar levels of inspection accuracy are required, so the facility is extremely well used and has quickly become a key element of our manufacturing set-up."