Information Research (IRL) has recently published a second edition of its world paint industry and market review study, The Coatings 100. The publication is available in two volumes: part 1 provides an overview and up-to-date contacts for the world's top 100 paint companies and part 2 is a complementary volume which provides a statistical compendium of the world paint market in 2006.

The global paint market, as characterised on the basis of 90 countries being counted, amounts to just over 36 million tonnes, giving mean per capita paint consumption around the world at almost 6.6kg/head, as seen in Table I. 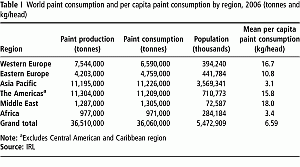 Assuming mean per capita paint consumption of 6.6kg/head and a global population of 6.6 billion, true world paint demand can be estimated at 43.4 million tonnes or approximately 34.7 billion litres:

The top ten of everything in the coatings markets around the world for 2005/2006 is summarised in Table II.

The Coatings 100, 2nd edition is now available from IRL, priced e2,000. The two individual volumes detailing the companies (part 1) and the statistics (part 2) are available to buy individually, price e1,000 each. 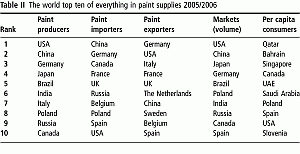 Sections from the report, priced individually, will soon be available to purchase online at IRL's web site: www.informationresearch.co.uk