Metallisation, experts in the technology of surface coatings, has launched a new HVOF system. The MET-JET 4L liquid fuel HVOF system (Figure 2) is the latest development in its kerosene fuelled HVOF systems. The new MET- JET 4L, while retaining all of the excellent features of the MET-JET lll, now boasts a number of enhancements and improvements. 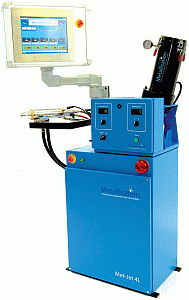 The MET-JET 4L is a mass flow controlled system, to ensure a repeatable coating, and produces the densest metallic and carbide coatings of all the Metallisation systems. The coatings can be compressively stressed, allowing thick layers to be applied without fear of spalling and with the new improvements, the result is a high quality, compact and easy to use HVOF system.

The new MET-JET 4L pistol combustion chamber has been modified to achieve cleaner burning and higher quality coatings. The nozzle arrangement has been simplified to reduce the running costs of consumable spares. The powder feeder has mass flow controlled carrier gas and closed loop motor control for reliability and repeatability of powder feed rates. The operator interface is still simple to follow, but is now via a touch screen rather than pushbuttons.

The key benefits to the operator include improved repeatability of the coating. The system is now much easier to use as it has an intuitive operator interface, either by PC or optional keyboard control. The system also provides a range of unlimited “recipes” which can be preset using the parameter recording facility, to ensure consistent coating quality, which in turn saves operator time.

The MET-JET 4L can also be programmed to start-up and shut down automatically or manually, to suit the needs of the operator. The hydrogen start-up ensures a smooth lighting sequence, reducing the loading on the pistol. The use of kerosene in place of hydrogen fuel makes the MET-JET 4L more economical to run whilst maintaining the highest quality coatings.

The MET-JET 4L has been designed to complement the existing range of metallisation's metal spraying equipment, and to offer customers a greater range of surface coating solutions.

With the Metallisation HVOF Spray System, MET-JET 4L, liquid fuel and oxygen are fed via a pre-mixing system, at high pressure, into a combustion chamber. Here, they burn to produce a hot, high-pressure gas stream, which heats and accelerates the powder particles inside a secondary nozzle so that they impact with tremendous kinetic energy upon the substrate material. The MET-JET 4L does not melt the powders, it just softens them, resulting in minimal oxidation and decomposition.

The new MET-JET 4L pistol has an optimised, single point fuel injection system to promote a complete, clean burn within the combustion chamber. There are two nozzle lengths available, 100 and 200mm, to enable a wide range of coating properties to be achieved, from hard, but ductile coatings, to extremely hard, but more brittle coatings. The simple nozzle design will also reduce consumable spares costs, which in turn ensures simple maintenance, therefore reduced down time for the operator.

The control system for the MET-JET 4L consists of a PC with a touch screen operator interface and a gas box. The PC provides a means of operator interface and overall system control. For reliability of operation, the actual control of the individual operations of the system is controlled by PLCs in the gas box, and powder feeder. The PC and PLCs are all linked by serial bus to minimise wiring and increase reliability.

The control system can accept signals from the booth door, the extraction system, robot and gas detectors to fully link and automate the system. It also provides the interface between the gas box, powder feeders and robot by serial bus interface. Up to 255 items can be interfaced, allowing multiple powder feeders to be linked.

•control valves and switching for sequencing and safe operation; and

The MET-JET 4L HVOF system is capable of interfacing via USB to an external interface source. This could, for example, be a barcode reader, an interlocked signal to production automation or a manual component selection switch box. If a barcode reader is used, the operator simply scans the barcode to set the correct parameters and advise the operator which powder to load into the powder feeder. Once the system is started it will run the automatic sequence in exactly the same way as previously run in line with the chosen “recipe”. This also enables the data to be logged against individual barcodes and stored to produce traceability of the coating and components.

Metallisation has been synonymous with surface coatings since 1922. From its beginnings as a company providing an answer to corrosion problems on structural steelwork, successive generations of highly respected principals have led metallisation to its current position, where it is respected as an expert in the technology of surface coatings.

Stuart Milton, Sales and Marketing Manager at Metallisation says: “We are constantly looking for ways to provide improved surface coating protection for our customers and distributors, so we are really pleased with the new MET- JET 4L. It is yet another demonstration to our commitment to provide safe, reliable, cost effective systems for high- end engineering coatings, to the diverse industries we serve. The development of the MET-JET 4L has also been a pre- cursor to gas fuelled HVOF system soon to be launched with coating properties equal to those produced by the 4L system.”

More information is available from www.metallisation.com