The ability to withstand extremes of temperature and chemical concentrations, coupled with mechanical impact, have led BP Chemicals to select Flowcrete Corrosion Protection's proven ATB-300® GL Honeycomb system for their pure terephthalic acid (PTA) plants across the globe (Plate 2). Representing a joint enterprise between the company and BP, the Honeycomb system has involved years of research and product development to cope with these extremes. 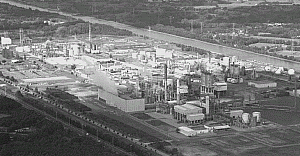 Initial trials commenced more than 20 years ago at the PTA 1 Belgium site. Since then, BP Chemicals has used Flowcrete Corrosion Protection – which acquired the Atako range of ATB-300® shrink free vinyl ester systems almost 2 years ago – to provide effective corrosion protection solutions for their operations in the rest of Europe, Asia and the USA.

Current projects include a massive installation at BP Chemical's PTA plant in Kuantan, Malaysia, where the recent construction has included the adoption of a newly-developed conductive version of the Honeycomb system. This new version allows spark (Holiday detector) testing for integrity and contractors are currently halfway through this massive project, after starting work on site in 2003.

Conrad Roumieux, Managing Director of Flowcrete Corrosion Protection, said: “The original trials in Belgium were undertaken in 1982 because acid bricks and lining systems used previously at the site were failing, mainly due to shrinkage and impact damage. Initially, ATB-300® screed systems were installed and successfully evaluated. This led to many different ATB-300® systems being used in both Outside Battery Limit (OSBL) and Inside Battery Limit (ISBL) areas during the 1990's PTA 2 construction, leading more recently to PTA 3, where we worked closely with TPL Engineering (Technip) of Rome. The installation of ATB-300 GL Honeycomb system was first carried out in the OSBL area at Geel some five years ago. Since then we've seen this system installed in BP PTA plants across three continents and our latest work using the conductive system in Malaysia gives BP complete assurance on quality”.

Besides the Honeycomb system, ATB-300® products include a range of specialist corrosion resistant floor screeds and renders, waste water treatment coatings and bund-lining systems. The products can be applied on both steel and concrete structures.

Based on a special shrinkage free modified vinyl ester resin – the ATB-300® range was originally developed by Belgian chemist Emiel Roumieux. It has currently been patented in 20 countries and is recognised as probably the most advanced chemical protection product range in the world.