Parker Hannifin reports that it has launched a new four-way miniature ball valve (Plate 4) designed for the cross-over control of two fluid streams. A novel one-piece seat and packing design is said to eliminate the potential leak path problems associated with the expansion and contraction of individual components found in competitive valves. It additionally is stated to allow the valve to work over a much wider temperature range than has been available to date. With a range of –54 to +149°C (–65 to +300°F), the new valve is believed to be extremely versatile and capable of high-performance routeing/directional control of media in chemical, petrochemical, oil, gas and other industrial applications. 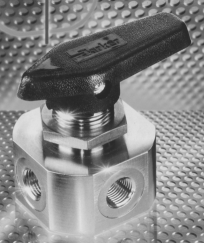 Designated the MB6X4, the ball valve's construction is thought to be ideal for fast-acting operation. This is aided by positive handle stops which provide exact port positioning. The MB6X4 has 0.062in/1.6mm orifices rated for 2,500psig (172 bar) CWP and a Cv flow co-efficient of 0.097. It is fabricated in 316 stainless steel, and is suitable for use with 1/8-inch tubing.

The seat/packing component is fabricated from PFA (perfluoroalkoxy), a material which is stated to be inert to most industrial chemicals and solvents, and highly resistant to wear. This is said to facilitate its use in systems handling corrosive fluids and gases such as those encountered in the chemical, oil and gas industries, as well as applications demanding high levels of purity or hygiene such as semiconductor, bio-pharm or food processing.

According to Parker Hannifin this one-piece design provides approximately three times the working temperature range of standard competitive valves, and eliminates dead-space between the valve body and ball which can trap particles or build up deposits. The company also informs us that, unlike other miniature ball valves, the packing nut on Parker's MB6X4 can also be adjusted without special tools.

In Parker's opinion, it is thanks to its computer-controlled manufacturing facility that users have considerable flexibility over construction specification to optimise the valve for particular applications. This, they inform us, includes a choice of integral single- or double-ferrule CPI or A-LOK compression tube connections – halving potential leak paths and assembly labour requirements compared with conventional products – or NPT pipe fittings.

The features claimed are said to provide users with a valve which is capable of miniaturising equipment designs for directional control, mixing and filling applications. This applications potential is thought to be further widened by the ability to mount on panels as thick as 4in/6mm, overcoming another limitation of conventional miniature ball valves.

For safety and durability, Parker has used nylon 6/6 for the valve's handle, a material said not to become brittle with age. The engagement from the handle to the stem is also a direct "D" drive, for positive operation.