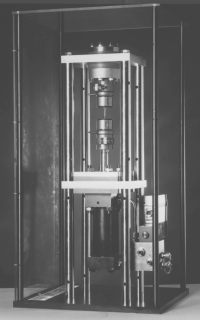 The successful application of thermal barrier coatings (TBC) is generally recognised as being essential to the development of high efficiency gas turbines both for aero and land based use. The TBC system consists of a so-called "bond-coat" applied directly to the material to be protected and then the TBC itself is applied to the bond-coat. The bond- coat acts as a corrosion resistant layer to protect the substrate material. Corrosion resistant coatings are developed to obtain adequate corrosion resistance, but their strain tolerance is frequently not considered during the development phase. It is this aspect of their performance that often leads to their premature failure, so allowing coating cracking to occur under service conditions.

NPL is responsible for developing tests to assess and evaluate the behaviour of coatings used in gas turbines for protection against corrosion and thermal loads. This project is part of a programme being funded by the Department of Trade and Industry under the heading, "Degradation of materials in aggressive environments".

Typically gas turbine blades are subjected to a very wide range of temperatures. For example, during heating, hot spots will be constrained by the cooler parts of the blade and thus be subject to compression. On cooling, the coating is placed into tension and cracking occurs if the critical fracture strain is exceeded.

The TMF test rig enables small samples of substrate and coating to be subjected to many thousands of cycles of applied mechanical strain (typically 90 second cycles) at temperatures up to around 1,100°C. The Parker HMI hydraulic tie-rod cylinder - with a 63mm bore and 125mm stroke - provides the mechanical force to produce precise tensile and compressive forces in the sample in order to simulate in-service conditions.

The cylinder position and movement is controlled via a Parker DIFM high response, high resolution proportional valve mounted on the cylinder. This, in turn, is controlled electronically via a Parker BD101 signal conditioning card which accepts the commands from the NPL computer programme. The hydraulic supply is from a 0.75kW electric motor driven power unit positioned adjacent to the test rig.