In June, Lincolnshire-based Scangrit unveiled a new grading system for its Iron Silicate products (Table I). 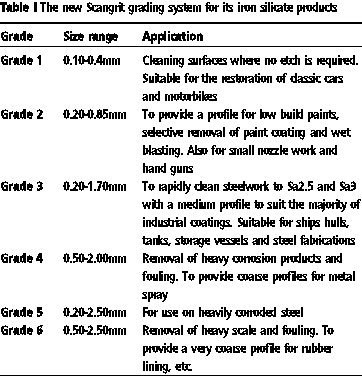 Used on many applications from the Millennium Wheel to the Tinsley Viaduct on the M1, Scangrit's copper slag - as the product is more widely known - is undergoing a change, to provide customers with more choice. A new colour coded packaging system will also make it easier to select the appropriate grade from the extended range.

The company's copper slag range is currently graded from TURBO to HD with the HD grade being the most coarse. The most popular grade is Scangrit's SG medium grade which will now become Grade 3, mainly used to clean steelwork on ship's hulls, storage vessels and bridges.

Scangrit will increase the copper slag range to incorporate six grades instead of four.

The new grades will be simply numbered one to six, with one being the finest, with a size range of just 0.10-0.4mm. This would particularly be used for cleaning surfaces where no etch is required, for example the restoration of classic cars and motor bikes.

The further grades' size ranges will follow on until ending up at the most coarse at 0.50-2.50mm.

Mark Graves, general manager of Scangrit explains the rationale behind the new system:

We decided to re-grade and re-package our copper slag abrasive to consolidate all grades under the umbrella of Scangrit. The system is also colour coded which will make the purchasing process for our customers a lot easier. It will also give them more choice, whatever their job I'm sure we'll have the grade our customers need.

Scangrit has just celebrated its 25th year in the industry. Its latest expansion, with new distribution centres now open in Southampton, Aberdeen and Glasgow, has meant that smaller quantity customers now receive the same treatment and competitive prices as larger contractors.