After 25 years in the abrasive business Scangrit celebrates becoming one of the leading UK abrasive suppliers (Plate 3). Established in 1975 Scangrit recently marked its silver anniversary. 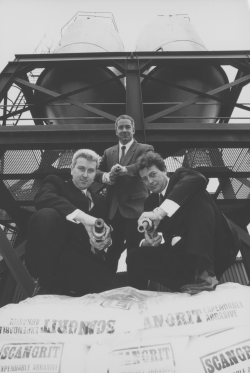 Over the past 25 years the company has serviced a variety of industrial sectors with its quality abrasives, from oil and marine to decorating and renovation. Its "grit" was used in the renovation of London's Tower Bridge and other prestigious architectural designs such as the Forth Bridge, Tinsley Viaduct and the HMS Ark Royal.

The past 25 years has seen a few changes in the abrasive business. We have increased our supplies to incorporate a total of nine types of abrasive from iron silicate to glass bead. We are also re-grading our most popular abrasive, iron silicate, which gives our customers more choice, depending on the job requirements. The next few months are going to be quite exciting also, we are planning new plant facilities and have new distribution centres, so the next 25 years will hopefully be just as memorable.

Scangrit also reports that it has recently opened another three distribution centres, adding to its existing eight situated throughout the UK, in Aberdeen, Glasgow and Southampton, enabling smaller load customers the ease of collecting their own abrasives or the minimal cost of it being delivered.