A manufacturer of precision aerospace components reports more than a 50 per cent reduction in the time taken to blast clean small investment castings, following the introduction of a USF Vacu-Blast "Ventus" pressure-fed cabinet machine (Plate 2). This is just one of many companies using this powerful abrasive blasting machine that have gained similar production benefits, says Vacu-Blast. 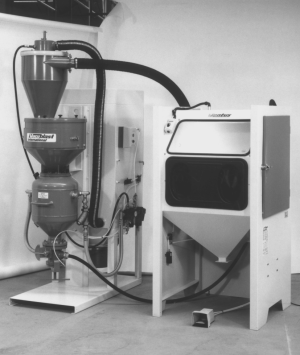 In the example quoted, the Ventus "92PR" machine replaced a substantially less efficient suction-fed blast cabinet, and can clean the same number of parts in less than half the time needed before - and to a higher standard. This has reportedly led to a marked increase in production throughput, as well as improved quality.

Specially designed for this kind of demanding production application, the Ventus 92PR has a 986mm x 796mm x 800mm high blast enclosure and utilises a separate, free-standing, high integrity media recovery power pack. The blast media - chilled iron grit is normally used to clean castings - is continually recovered during the blast cleaning operation and undergoes in-cycle cleaning and regrading; this reportedly ensures that only good quality media is recycled to the manual blast nozzle. Degraded media, dust and debris is directed to a dust collector. This provides consistent cleaning to the highest standard.

The machine is claimed to be able to use all types of blast media and includes a full-width viewing window and high internal illumination for optimum operator comfort. Blast pressure is said to be easily adjustable to suit the job in hand and an integral blow-off gun enables residual dust to be removed before parts are unloaded.

USF Vacu-Blast "Ventus" pressure fed abrasive blasting cabinets are said to have been specially designed to maximise work rates, with optimum energy efficiency. USF Vacu-Blast believes that compared with suction-fed machines, pressure-fed machines achieve greater surface cleaning coverage for a given amount of energy and operate to a much higher intensity. They are said to be ideal for "tough" production line jobs, such as de-rusting, descaling and the removal of thick paint layers. A comprehensive brochure detailing the "Ventus" pressure-fed range is available on request.