The Crossness Southern Outfall Works are located on the Erith Marshes on the South bank of the River Thames at Halfway Reach. This vast Victorian pumping station was built in 1864 as the final link in a system of intercepting sewers built across South London to help eliminate the growing use of the Thames as London's main sewer.

In the mid-nineteenth century the Thames was also used by London's rapidly rising population as its main source of drinking water. After a series of serious cholera epidemics, culminating in "The Great Stink" of 1858 when Parliament had to hang chlorinated curtains at its windows to stop the awful smell from the river permeating the House, finance to start the work was eagerly voted through.

The resulting impressive building at Crossness was designed in the Victorian Romanesque style to house four of the largest rotative beam engines ever constructed, each able to pump over six tons of sewage per stroke. The system of sewers proved to be effective in alleviating London's problems and the Southern Outfall Works remained in service for 92 years.

It was the sheer size of these engines that saved them when the station was decommissioned in 1956. They proved too expensive to demolish and, although falling into severe dilapidation over the following years, their salvation came in 1980 when the building and engines were listed as Grade I by English Heritage.

In 1985 the Crossness Engines Trust was set up, a registered charity run entirely by volunteers, who are working with the aim of bringing at least one of the engines back to life in the fully restored buildings. With its deserved reputation for long-term protection, Denso Protal liquid coating has been used to coat vulnerable sections of cleaned steelwork at the site to protect them from corrosion, with further trials on other sections ongoing.

The painstaking restoration of one of the engines to its original condition is now well on its way to completion (Plate 3) and a visit to the site, which is steeped in atmosphere and is a monument to Victorian ingenuity and craftsmanship, is thoroughly recommended. 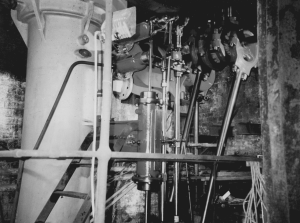