A derelict Grade II listed building in Manchester is being transformed thanks to a new innovation in the repair of steel-framed buildings. The technique is being pioneered by design and technology consultancy Taywood Engineering Limited and involves the application of cathodic protection to control steel frame corrosion and subsequent deterioration of the façade. In this case, cathodic protection has yielded savings estimated in the region of 50 per cent on initial outlay compared to traditional façade repair options.

The Joshua Hoyle Building spans the Rochdale Canal opposite Manchester Piccadilly railway station and comprises a structural steel frame with a brick and terracotta façade (see Plate 1). The building was acquired with the intention of converting it into a three-star Malmaison hotel. It had been unoccupied for some time and the façade was suffering from extensive cracking and spalling terracotta from the upper storeys. Deterioration was set to increase unless the corrosion of the steel frame could be arrested. 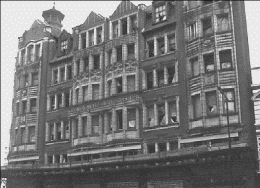 Traditionally, the treatment of steel frame corrosion has required removal of the façade to clean back the affected steel, treatment of the steel surface and the reinstatement of the façade. This can be a costly and time-consuming process: for the Joshua Hoyle Building it meant that the cost of undertaking traditional repairs to the full façade would make the project unviable. However, Taywood Engineering was able to develop a cost-effective repair solution using cathodic protection that meant the development could continue as planned.

Taywood Engineering has been developing cathodic protection technology for steelframed buildings as a result of ongoing applied research since 1990. This initially resulted in the installation of the first cp system to protect historic masonry at the entrance colonnade to the Prime Minister's Residence in Dublin. Careful monitoring of this system since 1991 has generated confidence in this type of cp application. TEL has since designed a similar system for the Inigo Jones Gateway at Chiswick House a staircase at Kenwood house, both at the request of English Heritage.

TEL's expertise in the field of cathodic protection was further boosted during a two year research project funded by the DoE (now the DETR), in which corrosion problems in masonry clad steel framed buildings were investigated and cathodic protection technology further developed. Among the landmark buildings studied were two Tait buildings: the Scottish Office in Edinburgh and Lloyds Bank headquarters in Lombard Street, London.

For the Grade II listed Joshua Hoyle building, these benefits made the difference between a new lease of life as a commercially viable building or continuing decay. Taywood Engineering's proposed cathodic protection system was trialled and proved feasible in June 1996. Costings for the finalised design showed substantial savings on initial outlay over traditional façade repairs. Lifetime costings will also prove cheaper; because the corrosion process has been halted, further damage to the brick and terracotta has been minimised.

The full cathodic protection system was applied to both the front and side façades of the Joshua Hoyle building in early 1997 and the hotel is currently nearing completion. Original features were retained at the rear of the building, with some steel columns exposed as an architectural feature. When it opens in 1998, the new Malmaison hotel will comprise the original Grade II listed building plus a new extension. Facilities will include 112 bedrooms, conference facilities and a gym, sauna and solarium.

The architect for the Joshua Hoyle refurbishment project was Darby Associates and the specialist stone contractor was Cameron (Northem) Limited.