As a leading global component supplier to the automotive industry, the Keiper GmbH & Co Group develops and manufactures metal seat components and structures for automotive industry suppliers and manufacturers. Quality control using vision technology on the production line has brought flexible production lines, investment return in under a year and increased efficiency.

The company's range of products meets demand in the automotive sector for intelligent adjuster systems and innovative seat structures both for front and rear. The team at their plant in Germany were looking for new ways to make the presence and variant inspection of components on the production line more flexible and reliable. In the past, it used a complex mechanical control system, equipped with a number of touch controls which proved less then dependable.

Before embarking on a vision solution, the different challenges that would present themselves had to be considered. Various elements in the production process could potentially prove problematic to a vision system:

Keiper awarded the project to Octum, a Cognex Partner System Integrator (PSI) having considered their vision proposition based on the latest In-Sight® vision sensors. Cognex technology proved capable of providing a vision solution robust enough to handle the challenge. Owing to the high resolution of the In-Sight 5403 vision sensor, high precision can be assured even for large components when measuring parts offering greater production flexibility. The In-Sight 5400 vision sensor family also benefits from a full range of software tools such as PatMax™. PatMax functions using the geometrical structures of objects (similar to CAD). The most important characteristics of an object such as edges, dimensions, shapes, angles, arcs and shades are isolated, identified and compared to the real-time image. Analysis of the data permits the operator to accurately define the objects position.

Reliable feature detection and incorporation of the In-Sight vision sensors in production offer other benefits. For example, with the individual component variants there are minor differences as to whether the right or left-hand fitting side of the seat is concerned. Sometimes the right parts are inserted on the wrong side of a seat. Precise feature detection by the vision tools identifies such problems and notifies the operators. The error is corrected and production flow is not interrupted.

A complete turnkey system solution was implemented in only six weeks (Figure 1). The first control station was installed in June 2006 and has been operating reliably in three shifts including at the weekend since then. Given the satisfactory results, another control cell was established at the Kaiserslautern plant in February 2007. During this time the customer-specific user interface Octum designed for Keiper has proved to be ideal, making programming child's play for machine operators and maintenance staff. 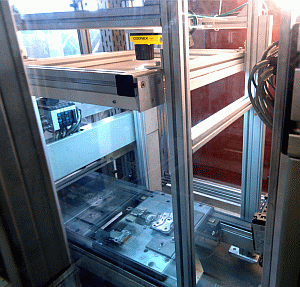