Toshiba Machine's TH350 SCARA robot was the logical choice when a manufacturer of miniature circuit breakers (MCBs) needed to replace an existing pneumatic pick and place machine. After changes to the manufacturing process, the existing equipment was not able to perform the required task in the necessary cycle time. With the help of system integrator Automation and Robotics Ireland, the TH350 was installed and now easily meets its targets (Plate 4). 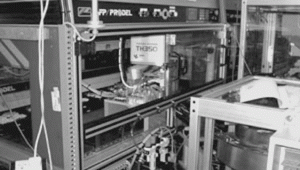 There were two main reasons why the TH350 was chosen. Firstly, the production line manufactures MCBs at a rate of 24 a minute, so exceptional repeatable accuracy was required for this high-speed assembly task. The TH350 is both fast and accurate – it offers repeatability and positioning to ±0.01 mm and a completion time of 2.9 m/s.

Size was the second important factor. The TH350 was ideal, as it is both compact and powerful, offering a 3 kg maximum payload. With an arm length of 350 mm and minimal footprint and head clearance, the robot's compact design allowed the engineers to locate it inside one of the workstations on an existing automatic assembly machine. Furthermore, the TH350 is extremely flexible and offers movement of ±115 and ±145° on axes one and two, respectively.

In addition, the installation created very little downtime. All it took was a long weekend during which the robot was interfaced, through the robot controller, to the existing line equipment. The TS1000 controller offers five-axis simultaneous control and is easily programmable using SCOL, a programming language similar to BASIC. System control is easy with the built in PLC and the robot is compatible with DeviceNet, Ethernet and Profi-bus.

“This powerful package should be of great interest to manufacturers operating high-speed processes such as assembly or pick and place work,” commented Nigel Smith of TM Robotics. “The TH350 offers very short payback times and attracts both large and small manufacturers. It is very cost effective, which is something smaller companies will be interested in, while manufacturers specifying larger assembly lines will benefit from the extremely attractive return on investment cycle.”