Polycarbonate (PC) material is for use in applications such as food-, pharmaceutical-, and medical-equipment modeling, as well as automotive applications.

Rapid prototyping system maker, Stratasys, has announced that it has developed a PC modeling material for food-, pharmaceutical-, and medical- equipment modeling, among other applications (Plate 2). 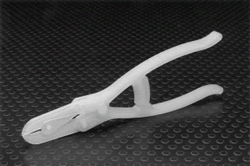 PC is a durable plastic, first introduced for rapid prototyping in 2001, and now common for functional prototypes. Design engineers select PC for its high impact and flexural strength, as well as its ability to handle high-temperature applications.