DELMIA Corp., a Dassault Systemes company has announced that QUEST has been used on the design of a major new production facility at Baxi Potterton with startling results (Figure 1). 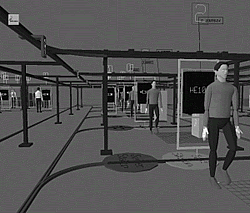 The design of the three linked production lines had already been completed to the satisfaction of the main contractors who were about to start work. The three lines, which have been brought online for a new model of boiler, boast many automated stations, an HMI unit and barcode data capture. This level of integrated logic had never been tried before by Potterton, especially on a facility that can cope with standard, combination and condensing boilers, all of which have different build and testing times.

Paul Bilbie, the firm's Manufacturing Engineering Manager felt there was too much at stake for the project to fail and he did not have complete confidence in the line layout. He began to research discrete event simulation systems and selected QUEST from DELMIA, primarily for its powerful 3D simulation capability. He explained: “Time was of the essence, so DELMIA worked flat out to produce a fully operational model in just nine days. Once we ran the simulation, it proved my hunch had been correct; the facility would have been completely starved of carriers by 2 p.m. on the first day of production. This would have induced total gridlock because all the carriers would have been full of partially completed boilers, so there would have been no way of releasing the completed boilers from the line. The total loss of production would have been 19 per cent”.

Once this catastrophe had been averted, DELMIA worked with Baxi Potterton's, program engineer to develop the program, add the logic control and optimize the lines. Carrier numbers and speeds were fine tuned and the team explored the knock-on effects of cumulative “what if” scenarios. Decisions made earlier in the design process were proved. As an illustration, it was found that there were not enough test rigs should any fail, so more were added. The contractor was able to begin building the last of the three lines during the planned summer outage.

The line has at present been operational for a month. Paul Bilbie commented: “Everything is running remarkably smoothly. The commissioning went very quickly because there were no bugs and there have been none of the little niggles that beset new production lines, because every angle had been explored before it was set up. QUEST enabled us to notice lots of things we would have failed to spot before. For example, we changed the layout of the packing area, because the boilers were stopping 13 seconds away from the packing station. Our company directors became devotees of QUEST after flying round the model and were able to really understand the critical issues. QUEST builds confidence in decisions made and therefore creates trust from the Chief Executive downwards”.

Information about DELMIA is available at: http://www.delmia.com

Information about Dassault Systemes is available at: http://www.dsweb.com