An even greater step towards higher performance

An even greater step towards higher performance

Oriental Motor, Japan's largest manufacturer of Stepper and AC motors, has announced an enhanced version of its Alpha Step range of stepping motors and drivers. The Alpha Step Plus range offers even more functionality to what was already a revolution to the world of stepping technology (Plate 6).

When Oriental Motor's Alpha Step motors first appeared in the market they generated a significant level of interest due to their novel method of operation. They combined the best of stepper motors and servomotors within the same unit. Using a special sensor and closed- loop operation, they are able to work without any loss of synchronisation. They do not require gain tuning and “hunting” is eliminated leading to stable dead-stop positioning. 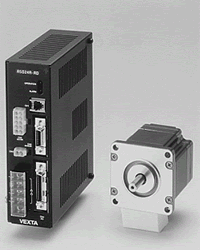 Owing to a unique rotational sensor design, which mimics a thin slice of the stepping motor, the motors are also able to offer precision rotor position detection by measuring the change in inductance, due to the distance between the stator “teeth” and sensor “teeth”. The use of a built-in feedback device also removes the need for encoders and resolvers, cutting down on the overall motor package. Reliability is also enhanced, owing to an inherent immunity to shock and temperature fluctuations that often affect encoders and resolvers.

The new Alpha Step Plus range takes these defining performance characteristics and improves on them further, owing to enhancements to both the motor and its associated driver. The Alpha Step Plus drivers have seen significant development, owing to the incorporation of a controller. The controller, which can be programmed via HyperTerminal on a PC, can accommodate 14 programmes, each comprising 64 lines with one command per line. All commands can be entered using intuitive, easy-to-use PC-based software. The drive also accepts eight input signals direct from sensors or other devices, so that all control and feedback can be fed to and from a single source.

The accompanying geared motors currently come with enhanced backlash characteristics, owing to the incorporation of a twin planetary gearing system. Rather than exhibiting two geared stages in series, the gear sets work in parallel, but slightly offset, circumferentially, relative to each other. One reduces backlash clockwise, the other anti-clockwise, resulting in a combined backlash figure of just three arc minutes. In addition, this new arrangement not only offers higher levels of torque capability – 5 Nm compared with 3.5 Nm offered by Oriental Motor's original single planetary arrangement – but it also runs at higher speeds, 600 rev/min compared to 360 rev/min. It also enables higher positioning accuracy as well as an extensive range of low gear ratios that would be difficult to achieve with harmonic gears.