For the first time, a unique new automation solution has been developed for the manufacturing test of disk drives in production volumes. The project made use of machine vision (MV) technology both as a system development tool and as an integral part of the solution.

In August last year, Xyratex announced an advanced automated disk drive test solution based on the original concept of a single cell thermal environment. Unusually, MV technology was used as a development tool as well as part of the solution.

Software team leader Kevin Richardson explained: "Vision is usually bolted on to an automation process, but DVT cameras were in from day one, when the project was at the theoretical stage." This is a significant factor. Given that automation will require MV, by incorporating it before development has even begun, system designers are able to construct the most efficient solution.

Xyratex chose to work with SmartImage cameras supplied by DVT Sensors. Tony Moran, Technical Director at DVT distributors Abcon, supports the view that automation solution design is easier and cheaper if MV is incorporated at the beginning: "Often we are asked to supply a DVT solution once the automation system design is virtually complete. In almost every case, the system designer has underestimated what intelligent MV can do now, and ends up having to redesign the system, or significant elements of it, costing time and money."

In September 2001, Xyratex assembled a team and work began. Automating the drive testing process meant tackling two main issues: enabling individual drives to be tested independently within the same system; and ensuring these could be loaded and unloaded in precise space and time.

The first problem was resolved by developing a different paradigm for disk drive that the Xyratex team named "Single Cell Environment" technology. This ingeniously unique approach works by creating a separately controllable and configurable environment, a cell, for each disk drive.

Every cell's "personality module" identifies the particular drive interfaces (fibre channel/ IDE/SSCI). Each cell's thermal environment can also be controlled to within 1/10°C, and an integrated air management system enables testing at below as well as above ambient temperature.

Xyratex wanted their automated disk drive test station to be easily incorporated into the production process. A pick up point enabled a robot to collect each individual drive delivered from the factory conveyor and placed into a specially designed tray. Each tray containing its drive is then matched with and loaded into a single predetermined cell located somewhere within a racked frame. The system currently used for ongoing development in Havant comprises two racks containing 1,152 cells, although the number can vary according to needs.

Once this arrangement of cells was determined, the next problem, that of loading and unloading drives in precise space and time, became more apparent. Any automated loading system would require robots able to determine exactly where each drive should be located, and when, in order that it receive the appropriate tests and environment.

Xyratex's idea was to mount a DVT camera onto the robot to perform four predicted functions:

In fact, because Xyratex approached the project with DVT cameras involved at the start, they found that they were also able to quickly resolve other issues that emerged during system development. One such issue was critical to the system's success.

This related to the racks themselves. The design is of high density so that clients need not invest in additional floor space. Consequently, the matrix had to be very accurate in order that the robot could precisely insert each cell. The initial thought was that this had to be within a differential of just 1 mm. This meant that simply constructing the racks became an expensive process, adding to the cost for customers.

However, because DVT cameras can physically self teach positioning and set themselves their own memory of locations to within 1/10 mm, there was less requirement for such absolute precision in rack construction, so costs were kept down (Plate 5).

Even in operation, the camera makes occasional minute adjustments to the gripper's position in relation to each location, when a reposition is required. Xyratex Senior Software Engineer George Butler says: "In effect, the cameras became a system development tool as well as part of the overall system. They played a key role in helping us to develop the most cost effective system, as well as perform the function of precise loading of each cell." 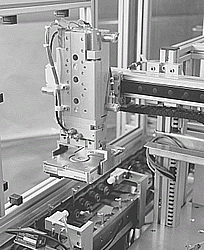 To track and detect possible errors on each cell tray, Xyratex used DVT Series 600 SmartImage sensors equipped with an infrared light source. An infrared LED on each cell was designed by the Xyratex team to work with the camera. The LED identifies and transmits each cell serial number to the camera at speeds of one image every 12 ms, such that the system knows which cell is in which location on the rack.

Again to cover for possible failures, there is a checksum on each tray label to ensure that it has been correctly read. "If we had used a webcam for barcode tracking, the images would have to be sent from the camera to the PC, where they could be processed, meaning 'very slow' and requiring us to write some software. But with DVT's camera, the whole solution comes out of the box, making it very easy," says Richardson. "In fact this is true also when working out the calibration issues. DVT software is more than nice. It's got all the tools, is easy to set up and has all the processing in the camera."