When Whitstable-based Concept Automated Systems needed to build a fully automated rotary production machine for an international telecommunications client, they turned to Milton Keynes company IKO Nippon Thompson for the expertise and products to help do the job.

Concept, arguably one of the UK's most respected builders of such machines, worked closely with their client in order to absorb every detail of their process requirements. The machine replaces a manual production line to fabricate a coaxial type cable connector some 20mm long x 7mm diameter. Each connector has to be accurately manufactured, crimped and dimpled from seven separate components which are loaded into vibrating feeders by the machine operator. Once the machine is loaded and started, the components slowly vibrate towards the workstations which are mounted on two indexing tables, one with 14 stations, the other with six stations. The main production process is undertaken on the larger indexing table, while checking and the discharge finished article occur on the smaller, six-station indexing table.

The machine has large polycarbonate viewing panels, which gives the operator full visual communication with the 20 workstations. The viewing panels are openable and are controlled by interlock safety devices which instantly stop the machine if a door is opened. For noise containment, the machine also has a polycarbonate roof. The main indexing table and the indexer beneath it are of a hollow-shaft type, enabling a large diameter vertical services feed conduit or tube to pass through. This continues up through the polycarbonate roof and turns through 90°, hanging as a horizontal feed arm over the outside edge of the roof. On this feed arm is hung a services and display mounting "limb" on to which a human-machine interface (HMI) is mounted.

The horizontal feed arm and the display limb fitted to it can rotate 360° about the machine, so that the operator can move the HMI with him as he walks around the machine (see Figure 5). 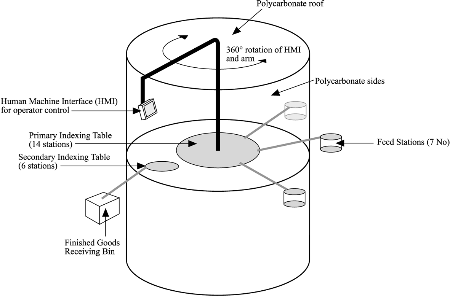 At each station on the primary and secondary indexing tables, IKO Nippon Thompson LWH rails and slides move the various tools forwards and backwards, enabling the production process to be undertaken. The tools are moved pneumatically via a series of tubes distributing compressed air from the single entry feed to the machine. Concept Automated Systems were extremely careful when selecting separate components for the compressed air and sliding elements. It would have been considerably easier to build the machine using tandem units but the air driven elements wear much quicker than the slides, meaning that subsequent maintenance would have been more expensive.

In essence the machine is a group of 20 individual robots arranged around the two indexing tables. At each workstation, the tools for the various stages of the production process are mounted directly on to the IKO Nippon Thompson supplied LWH Series slides; the slide moves along the rail, as commanded by the pneumatic cylinder where the work to be undertaken is then executed. The indexing table then rotates taking the workpiece on to the next stage in the process. As with any rotary machine, all of the stages are integrated into an overall process.

On two of the stations on the secondary indexing table, laser through beams are used for measurement plus one laser "pin-check", plus two LVDT readings. The HMI can display over 120 screens, giving the operator every possible piece of information such as production output figures, fault details, operator function screens, etc. even a flashing amber light so that a fault condition can be seen in a noisy working environment.

Concept take everything into account when building a machine. For instance, the recently completed project underwent a 63,000-cycle "run-in" test before being delivered. Thus every aspect of the machine, including the IKO supplied slides and rails, the indexers, the pneumatic cylinders, etc., was properly and thoroughly tested prior to handover. In keeping with all Concept Automated Systems' products, the machine is fully CE compliant and is supplied with all documentation including risk assessment documentation, operator manual, etc.

On first analysis, the LWH series chosen for this application seem over-designed, but Martin Hills cautioned:

The vibration feed method creates considerable movement in the machine structure. Even though this unit weighs in at around three tonnes and has a significant steel frame, vibration can be a problem with smaller components suffering. We selected the LWH series because they offer sufficient torsional stiffness and rigidity to overcome any tendency to move.