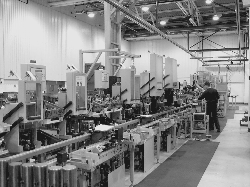 The new assembly line enables a large number of components to be brought together; a basic casting moves on a strong continuous roller conveyor system through various workstations to build a complete disc brake.

Maintaining precision throughout the assembly process is essential for Meritor, since it supplies disc brakes to virtually every European truck manufacturer under JIT conditions, and has an enviable record to uphold. A project engineering team, headed by Excel's Roy Eastwood, worked closely with Meritor staff to devise the most practical system for assembly of a new heavy-duty brake.

Housings move along the line to each workstation in turn, allowing components to be added directly to the unit. At certain stations sub-assembly operations are required prior to this element being inserted into the brake assembly. During these operations various forms of monitoring techniques are used to ensure correct build.

When a complete heavy-duty brake assembly reaches the end of the production line Meritor is confident that it meets its clients' strict build quality due to in-line QA procedures accommodated by Excel Automation at various workstations.