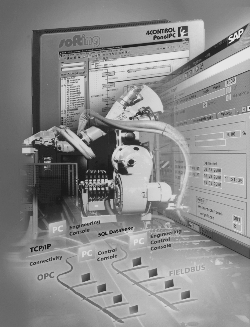 The set of four functions within one package is believed to be unique in the controls industry and offers rich opportunities for flexible-architecture plant floor automation and simplified vertical integration with Ethernet TCP/IP and Internet domains. Using 4Control to automate their manufacturing enables users to implement customised "local area" distributed control strategies that integrate easily with IT systems and Web-based management and maintenance hierarchies. Integration with production management systems such as SAP/R3 is proven at a number of sites.

The PC-based platform reportedly ensures that hardware and training costs are reduced and investments protected. A library of function blocks for building automation is already available and a pharmaceutical library is under development. The intention is to build these and other industry-specific libraries to simplify engineering still further by providing ready-to-use components for end users. Library components are also available for system and network operations for file management and database access.

4Control uses a standard Windows NT kernel, guaranteeing compatibility with all common Windows software and allowing error-free use of 4Control with other systems, e.g. SCADA, on the same PC. Determinism is addressed through the networking capabilities of PROFIBUS. Since 4Control uses Java (also as a programming language), exception handling – for eliminating divide-by-zero weaknesses – and the absence of stacks and stack pointers provide exceptional stability. "It's as solid as a brick" was one comment made during a recent UK product demonstration.

4Control was launched about 18 months ago in Germany and is now used in 200 installations in Europe (mainly Germany). To answer the demands for dedicated hardware, Softing also offers NT-based PanelPCs with touch screen, and FieldPCs with integrated fieldbus cards, to connect to the field.

For further information, visit the Web site at: www.softing.de