The facility comprises a new chassis test cell and two new engine test cells, each with its own CC-Link network. Each network is interconnected with the other two to provide a seamless communications strategy for any combination of cells. 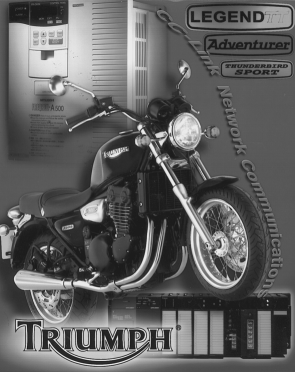 CC-Link is Mitsubishi's proprietary control and communications network for automation systems, based on standard RS-485 twisted pair connections. Triumph is committed to technological excellence throughout its production processes and originally was drawn to the idea of open, multi-vendor communications, but finally went with a dedicated system instead. Special projects supervisor Andy Parker-Bates, explains his decision-making processes:

"A superbike's engine and chassis are going to be worked very, very hard. They are designed to react instantly, predictably and smoothly while under incredible strain, say during a sudden acceleration or deceleration surge. To ensure Triumph riders remain safe under the most extreme conditions, we have to know exactly how our bikes will react millisecond by millisecond when put through their paces. So the development team needs best in class signal resolution in its data capture technology, and CC-Link could be guaranteed to provide this with the utmost reliability."

At 10Mbaud, CC-Link's basic operating speed is higher than most comparable open systems, and is effectively faster still because the dedicated protocol is more efficient than a general purpose equivalent. It has a number of special features that would be difficult to emulate in a multi-vendor environment, such as pre-configured function blocks for ease of set-up and error-free node disabling for maintenance and reconfiguration.

Mitsubishi believes that each networking application has to be individually assessed before a protocol is selected. "We remain committed to ASi and PROFIBUS as our open network offerings, and will always specify them where they are the most appropriate choice", says Chris Hazlewood, a communications expert at Mitsubishi. "We don't start by asking 'which protocol?', but 'what does the user want to achieve with his network?' Once we have identified the performance criteria, then we can select the most appropriate protocol".

"In many situations, the higher performance hardware, more efficient and focused protocol commands and the many additional features that can be offered in a proprietary network outweigh the multi-vendor aspects of an open network. For those applications where the systems overheads, performance limits and restrictions on development imposed by conforming to an open network protocol cannot be justified, CC-Link is the ideal solution."

Automation equipment within the Triumph test and development cells include A500 drives, A-series PLCs and other Mitsubishi products, which are configured as 30 or more separate nodes on the CC-Link networks. These are all controlled over the three networks and, crucially, upload simulation data from a central computer input by Triumph's test and development engineers.

Each engine test cell consists of a dynamometer, which is powered by the motorcycle engine under test. The dynamometer creates a load for the engine to work against, and this can be varied by the dynamometer controller. Airflow is generated by a fan driven by a 45kW A540 Mitsubishi inverter, which is adjusted to simulate various riding conditions. The A500 series of drives is Mitsubishi's flagship inverter range, the online autotuning feature of which is a tremendous advantage for Triumph's busy engineers.

The chassis test cell is basically a rolling road with some added refinements such as an external air supply fan, which means that fully realistic operating conditions can be simulated in a highly compressed time envelope.

Cooling water is piped through each cell to cool the engine and dynamometer. This is pumped around a closed circuit that includes an external cooling stack for temperate test cycles and a heater for elevated and extreme temperature tests. This environmental system uses Mitsubishi drives and PLCs connected via a dedicated CC-Link network, which communicates with the CC-Link of each individual cell. Inverters are used to vary the cooling water flow rate and to control the cooling tower airflow fan to optimise the cooling effect for each individual test.

Parker-Bates continues: "We have a lot of distributed i/o around the plant, and when you do an audit an awful lot of our automation hardware is Mitsubishi, so CC-Link is proving a very attractive solution to our networking needs. We now have CC-Links networks controlling the three main assembly lines - engine, chassis and body - which form the very heart of Triumph production. A network connects the programmable controllers and inverters in the paintshop, and when we revamped our production line's rolling road last year computer communication was at the core of the system design requirements".

The CC-Link networks do not stand alone, but are integrated parts of Triumph's complete design, development, production, quality assurance and business control system; a seamless part of the ongoing Triumph legend.