Controllability and repeatability have been key factors in the selection of plastic hot air staking technology from PHASA Developments to secure control panel assemblies on a new digital satellite receiver.

"Another important consideration was the need for the assembly method to avoid heat damage to the painted front surfaces of the moulded components", comments Steve Morris, project engineer at specialist sub-assembly supplier, Transtec Plastics South Wales.

At the heart of the solution installed at Transtec's Crumlin manufacturing plant is a standard PHASA 20/40 series staking machine. This is equipped with purpose-designed tooling to enable two sets of moulded high impact polystyrene components to be secured simultaneously to the fascia mouldings - for maximum production through-put.

Each of the intricate assemblies incorporates 11 pegs, some as small as 1.5mm diameter, which are heated precisely to bring them to their plastic state, before being clamped, re-formed and cooled to produce permanent, tamper-proof rivet head fixings (see Plate 5).

"By effectively creating 22 fastenings within a cycle time of just 12 seconds, this application demonstrates why plastic hot air staking is fast becoming a preferred method of assembly throughout the automotive, IT and domestic appliance sectors", says PHASA Developments' John Neugebauer. 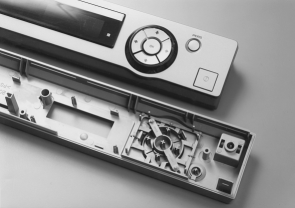 Plate 5 Eleven pegs, some as small as 1.5mm diameter, are heated precisely to bring them to their plastic state before being clamped, re-formed and cooled to produce permanent, tamper-proof assembly of control panel on a new domestic digital satellite receiver

"The PHASA system already proved successful on a previous fascia application we had undertaken", adds Mr Morris. "This gave us the confidence to specify it for the new model as well. The process provides permanent, vibration-proof fixing, yet requires only visual inspection. It also eliminates the hazards associated with adhesives and ultrasonic welding methods - making it the ideal choice for production line assembly operations such as this."

An easy-to-read 24-page design guide highlighting the benefits and cost-effectiveness of hot air staking assembly is now available free, on request, by calling PHASA Developments on +44 (0) 1279 657711.