A small standalone current sensor robotic assembly cell, designed and built by Tamworth-based CPR Automation Ltd for a major player in the field of industrial sensors, is already paying for itself in terms of reduced production costs (see Plate 4). Not only has the automated cell proved itself in terms of production reliability and repeatability, but the end product has a higher performance and is made at lower cost than before.

Current sensing is becoming an essential feature of many white goods manufactured worldwide. However, the sensor used is made up of a stack of intricately formed ferrous laminations, some of them measuring only 200 microns in thickness - which have to be assembled inside a wirewound bobbin of about 15mm overall diameter. As a result, the actual current sensor has become a highly complex item to produce and this, together with positioning of its associated identification label, has made the assembly a very costly production stage, if not effectively handled. 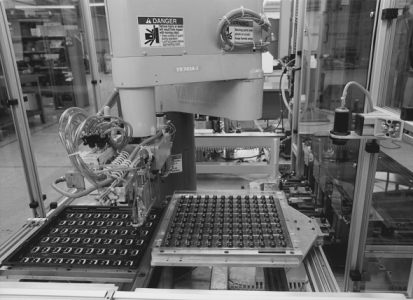 Several earlier attempts at automating the assembly process by various parties had failed owing to the difficulty of handling the thin laminations. To increase the difficulties, the requirements were for an assembly cell which not only could be arranged to provide successful automation but one that was capable of being configured to accommodate a family of products.

Faced with the dual problems of rising assembly costs and the need to increase the number of components within the sensor as a way of improving its performance, the company concerned turned to CPR Automation for a solution. It was only by exploiting the outstanding performance of the Yamaha YK840 SCARA robot arm that CPR engineers were able to succeed.

Capable of working within an envelope of 700mm horizontally and 150mm vertically, the robot arm carried a multi-tooled gripper including vacuum pads and pneumatically-operated fingers. With this, it was able to carry both laminations and bobbins, and is arranged to hold two of each at any one time.

During the original liaison phase, prior to building the cell, engineers from CPR Automation collaborated closely with the customer in redesigning the sensor. This involved many aspects of sensor assembly from the manner in which the components were loaded to the cell, to component shapes and forms. The way in which the machine could best be integrated into the manufacturer's production environment was also discussed.

In order to optimise the cost-effectiveness of the cell and to ensure that it could accommodate the widest possible variety of types and styles of sensor, the Yamaha SCARA robot was used exclusively for all pick-and-place functions within the CPR cell. It operates by taking wound copper coils from matrix trays, placing them in an assembly fixture and populating them with the requisite number of laminations.

Such is the performance of the Yamaha SCARA, that it is capable of picking and placing the laminations at the staggering rate of 70 operations/minute.

The assembly of the current sensors takes place on a set of dedicated assembly fixtures, positioned in front of the lamination feeders. They contain locations for the bobbin units together with positions for left- and right-hand lamination packs. The locations on which the laminations are stacked, allow them to be placed in position with the tips overlapping by around 2-3mm. They are then pushed inside the bobbin by means of a pair of air-operated push-rods. When they have been fully laminated, the sensors are transferred to a fixture in the label application area and the label is applied.

The robot then picks up the labelled bobbin/lamination assemblies from the labelling fixture and places them in the output tray area of the cell before moving to the bobbin input tray area to start a new cycle.