PC-based distributed control system (DCS) software is the fastest growing sector of the $1.9 billion global market for automation software, according to a series of reports from market analysis firm Datamonitor. These products now account for 16 per cent of global demand, following strong growth, especially in the smaller automation markets.

However, in the largest global markets, the bundling of complementary software products into software suites has been the key growth sector. This has been driven by the improving quality of generic software products as well as the growing importance of new sales and marketing strategies, as Windows-based automation software products become more similar in how they look and operate.

According to Datamonitor, PC-based DCS has been the fastest growing sector of the automation software market and now accounts for 16 per cent of global demand. This is despite being held back by the comparatively low market penetration in Asia, where PC-based DCS products account for just 10 per cent of the total market.

Process automation products, including software suites, remain the largest product category, accounting for more than 40 per cent of the market in all three regions studied.

Batch and recipe software contributes 17 per cent of the total global market (see Figure 1). The sector still includes a proportion of special application software and also some custom software. But, as in the manufacturing automation sector, lower cost generic software products are gaining share. 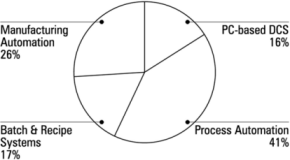 Because the three largest global markets - Germany, Japan and the USA - have had access to PC-based DCS software products for relatively longer than other markets, growth in the PC-based DCS sector has actually been superseded by the rapid growth in the market for software suites since their introduction in the mid-1990s. The largest automation software category, SCADA/HMI, has now in part been superseded by the software suite concept.

The growth in manufacturing automation products, real time database and resource management software hides a change in the nature of the market. In 1995, the market still included a number of high-value, largely custom built resource management and manufacturing database projects. The introduction of good standard software packages at relatively low prices has reduced the average value of manufacturing automation software projects, but the volume of projects has been greatly increased.

Similarly, in the batch and recipe software markets, suppliers of specialist systems designed for specific applications and markets have seen their business eroded by good, more general batch control software products. Overall, the market has grown strongly as the software is being implemented in an increasing range of new applications.

The markets for older software products and lower cost software products for data acquisition and trending are being eroded by falling prices of new more comprehensive packages. Important technologies such as soft logic and dynamic loop optimisation, are being integrated into software suites and PC-based DCS products, rather than being sold as products in their own right. Small independent companies still offer products in these categories but the market is limited in size and growth potential.

In the German market, software suites have achieved by far the strongest growth, increasing in value at an average rate of 71 per cent between 1995 and 1999 to reach a value of $49 million. In comparison, PC-based DCS software grew at an average annual rate of 30 per cent over the same period. According to Datamonitor consultant Martin Atherton: "These two sectors will be the key growth areas of the German, and indeed the global automation software market. Software suites will growth at the expense of operator interface systems and optimisation software products. Manufacturing automation products are also being sold as software suites that include HMI and increasingly a soft logical product".