Cognex has introduced Fiducial Finder II, an enhanced version of its software package used to locate fiducial marks on printed circuit boards for automatic board alignment.

Incorporating PatMax/Align, a revolutionary, highly robust object location software tool, Fiducial Finder II allows Cognex's new MVS-8000 machine vision systems to address the challenges of difficult-to-locate fiducials in the electronics industry (Plate 3). Fiducial Finder II is able to locate even severely degraded fiducials caused by oxidation, soldering, and other manufacturing process variations while maintaining alignment accuracy. It can also locate and precisely measure fiducials that change in size owing to board warpage, artwork stretch or a build-up of excess solder on a mark. 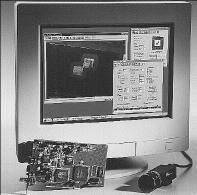 "With its ability to accurately find fiducials under widely varying conditions, Fiducial Finder II will help manufacturers of PCB testers, screen printers, and other electronics equipment increase alignment yield, while reducing the need for operator intervention."

Fiducial Finder II simplifies the logistics of board alignment applications in a variety of ways. For example, it is able to precisely measure the angle and size of fiducials within a single field of view, whereas previous methods would typically require at least two measurements at widely-spaced locations on a board to accurately determine its position. This potentially reduces the number of required alignment steps. Fiducial Finder II also adapts to the lighting and optics of the machine it is running on, enabling users to transport a trained fiducial model to different machines without having to recalibrate or retrain the system.

Electronic assembly equipment such as screen printers, drillers, dispensers, and board test systems need automatic alignment of substrates or printed circuit boards, prior to processing steps. A Cognex vision system running Fiducial Finder II software captures an image of each board and scans the image for a match to a pre-trained "model" of a fiducial stored in memory. The vision system determines the X, Y, and theta position of the located fiducial and sends those results to the production equipment, which moves the board accordingly.

Fiducial Finder II can be purchased as an optional software tool on MVS-8000 vision systems, or as an integrated hardware/software package, specifically configured for fiducial finding operations. MVS-8000 systems are available in both frame grabber-based and embedded CPU hardware configurations, and offer a full suite of MMX-accelerated vision tools for other machine vision tasks, such as gauging and inspection.