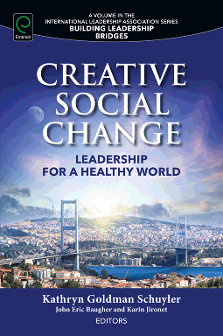 These are complex times for studies in leadership. In the past, it was much more straightforward. Leaders were recognized, elected, or appointed, and then once in place the main challenge was usually from rivals for the position. The mass of people generally accepted that it was for some to be leaders, but for most people to be followers. All that changed, perhaps most notably a century ago with the Great War, as it was called at the time. During World War I, there was, for perhaps the first time, serious regular criticism of the military leadership on all sides. Many of the leaders were in place through accident of birth rather than by popular demand or obvious skill and ability. The massive losses of life, the legacy of terrible injuries, and the sense that even the victors were diminished by the outcome ensured that all the traditional social and political leadership were damaged. The result was the collapse of the whole imperial order in Europe, with repercussions all around the world. This was followed by an unprecedented extension of democracy and, as the 20th century passed, an increasing and eventually almost universal rejection of the principle that foreign powers, or domestic leaders could legitimately take or hold power in a country by physical force.

After World War II, the process of decolonization gathered pace and elections increasingly became the principal mechanism by which changes of government and power could take place without a violent revolution. The social structure also changed with an appreciation that every individual should have the right to follow their own beliefs, ambitions, and way of life without restriction other than the avoidance of harm to others. There was also an increasing belief that anyone could achieve almost anything if they set their mind to it with sufficient commitment. Such was the dramatic and optimistic vista these changes appeared to open up that as the people pulled down the Berlin Wall with their own hands in 1989, Francis Fukuyama famously declared the triumph of western liberal democracy and the endpoint of humanity’s sociocultural evolution — “the end of history” as he described it.

However, as is always the case, even the best-informed foresight cannot discern with certainty what is beyond the horizon of time, and the decades since Fukuyama’s assertion have seen dramatic changes resulting from the continuing loss of deference and even respect for traditional forms of leadership, the exponential development of information and communication technology, and a new social order characterized more by constantly evolving networks than by hierarchies and bureaucracies.

The dawn of the new millennium has now seen something quite unexpected. While in areas like healthcare and technology there really is progress ever onward and upward, instead of a greater sense of freedom, stability, and prosperity we see a regression from the aspiration for a world of freedom-loving, free-wheeling, healthy egalitarian individuals, and the development of a patch-work of more anxious, inward-looking communities of people, fearful that while I can with pleasure travel to other people’s countries, they can now with ease come to mine and perhaps change its culture in ways that I find uncomfortable and unwelcome. In addition, not only can new fashion, new social trends, and remarkable new devices arrive in my community, but so can terrorists and drones. States that appeared to be on the road to democracy have imploded and been replaced with domination by fundamentalist warlords. War itself is no longer something that happens elsewhere, but is an unwelcome visitor on my own home territory, and if that were not enough, even our environment cannot be depended upon to stay stable, and is changing in ways which may threaten the continued welfare or even existence of some of our communities and even small countries.

The results of these changes, at once exciting and frightening, are paradoxical. Everyone feels they can be a leader, seeking out followers by broadcasting their thoughts in blogs and social media. No one gives much respect to those appointed or elected to leadership, and those who find themselves in such positions are unable to deliver the illusions of progress and prosperity which they had to offer in order to be elected. At the same time, there is a frenetic searching for those who through their ideas, inspiration, and charisma may provide new forms of leadership — thought leaders, agents of social change, and inspirational models who need to be able to convey their ideas and philosophy, if not in the 140 characters of Twitter, then in 15 minutes of video on a TED Talk.

Into this complex and uncertain context, the International Leadership Association gathers colleagues to bring their experience and expertise, addressing the challenges of leadership as it affects our environment, health, the arts, women, first nation people, ethics, and the United Nations and a clutch of other topical challenges and put it to paper in their Building Leadership Bridges series.

The most critical and difficult thing facing our path to a better future is determining how to change our culture, our way of being in the world in a community. How do we change our way of being in the world so that it accommodates to the new world? We can check off certain boxes in problem solving exercises, but can we change our culture? If we don’t change our way of being, as a whole community, we will die. In this volume, Creative Social Change: Leadership for a Healthy World, it is the editors’ and authors’ wish, coming as they do from different backgrounds and life experiences, to address the current challenges with a positive health-promoting and affirming mode of thinking, focusing less on the problems and what doesn’t work, but rather seeking out stories, models, and inspirations that can help us see how to change our way of being and contribute to a healthier world and better future.

When a group of us from Northern Ireland traveled to South Africa to meet with Nelson Mandela, he told us, “I’m not here to tell you how to solve your problems, but what I can do is tell you our story. And, if there are parts of that story that resonate for you, that help you in your journey, then that’s a useful thing for all of us and it’s good for us to have met.” Between the covers of this volume of papers, meet these ideas, let the authors lead your thinking into new paths and be excited by the possibilities.

Creative Social Change Leadership for a Healthy World
Endorsements
Creative Social Change Leadership for a Healthy World
Copyright Page
List of Contributors
Foreword
Acknowledgments: From the Editorial Team
Introduction
Part I: The Ground: Foundations from Thought Leaders
Advert 1
The Ground: Foundations from Thought Leaders
Visions of a Healthy World: Views from Thought Leaders
Part II: Air and Water: What Flows Lives
Advert 2
Air and Water: What Flows Lives
Reframing Organizational and Social Change: From Domination to Partnership
Ecological Consciousness, Moral Imagination, and the Framework for Strategic Sustainable Development
Use it or Lose it: About Leadership Ethics in the United Nations
Leadership for the Greater Good: Developing Indicators of Societal and Environmental Health
Developing Relational Leadership in Africa
Part III: Seeds and Plants: Local Case Studies
Advert 3
Seeds and Plants: Local Case Studies
The Inner Practice of Community Development: Embracing Deep Democracy in Mexico
Sumak Kawsay among Indigenous Women Leaders of Ecuador
Kiwi Ways of Leading: How 30 New Zealand Government Chief Executives Are Encouraging Healthier Cultures
“The Arts Are Not a Luxury”: The Arts as a Source of Community in California
Strengthening Communities through Adaptive Leadership: A Case Study of the Kansas Leadership Center and the Bangladesh Youth Leadership Center
Women and Leadership in Rwanda, Emerging Transformation: The Spiritual, Social, and Political Dimensions of Transmuting Suffering
A Living, Healthy World: Implications for Thought and Action
About the Contributors
Index
Abstracts