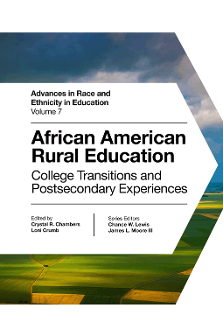 Chance W. Lewis is the Carol Grotnes Belk Distinguished Professor and Endowed Chair of Urban Education at The University of North Carolina at Charlotte. Dr. Lewis teaches urban education graduate courses in the College of Education and coordinates its urban education doctoral program division. He also serves as the Executive Director of The University of North Carolina at Charlotte Urban Research and Policy Collaborative.

Over the years, Dr. Lewis has held a number of positions in K-12 and higher education settings. From 2006 to 2011, he served as the Houston Endowed Chair and Associate Professor of Urban Education in the College of Education at Texas A&M University. During that time, Dr. Lewis also served as the Co-director of the Center for Urban School Partnerships. From 2001 to 2006, he was an assistant professor of teacher education at Colorado State University, and, from 1994 to 1998, he was a business education teacher in East Baton Rouge Parish Schools in Baton Rouge, Louisiana, where he earned teacher of the year honors in 1997.

Because of Dr. Lewis's scholastic achievements, over 100 school districts and universities across the United States and Canada have contracted his services to provide professional development and conduct program evaluations. His achievements have been recognized throughout the country in the form of numerous awards, citations, and recognitions for his work.

James L. Moore III is the EHE Distinguished Professor of Urban Education and executive director of the Todd Anthony Bell National Resource Center on the African American Male at The Ohio State University. From 2011 to 2015, he served as the associate provost for Diversity and Inclusion, where he managed numerous programs. He has also held other higher education positions at both University of South Carolina and Virginia Polytechnic Institute and State University.

Throughout the United States, Dr. Moore is a highly sought-after speaker. He has appeared in numerous documentaries, television and radio programs, and print media publications (i.e., newspapers, magazines, etc.). He has also frequently served as an education consultant and evaluator for a variety of school systems, state education departments, universities, and nonprofit agencies around the country.